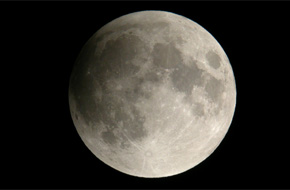 Gary Seronik shot this view of the November 8, 2003, lunar eclipse just as the western edge of the Moon was touching Earth's dark umbral shadow. The faint shading visible to the right of the dark lunar limb is caused by Earth's light penumbral shadow.

On the night of September 7-8, a partial lunar eclipse will be visible in Europe, Africa, Asia, and Australia. On the same night, observers on the west coast of the Americas will see a double shadow transit on Jupiter.

The Moon will barely enter Earth's umbra (full shadow), so just a tiny nibble will be taken out of the edge of the full Moon. Keen-eyed observers may also see the gentle shading of the penumbra on the rest of the disk. The partial phase will run from 18:05 to 19:38 Universal Time, and the penumbral effect may be visible for about 45 minutes before and after the main event. Fred Espenak's website has detailed predictions for this eclipse.

Later that same evening, from 7:59 to 8:52 p.m. Pacific Daylight Time, stargazers on the Pacific coast of America will be able to see eclipses of a completely different kind. These will take place not on our Moon but on Jupiter, where the moons Io and Europa will blot out the Sun simultaneously at widely separated locations on the planet's surface. Earth-based observers will see two tiny black spots (the moons' shadows) crossing Jupiter's disk. The event should be quite pretty if the seeing is good, despite the fact that Jupiter will be low in the western twilight. See our article on the phenomena of Jupiter's moons for more information.