This year offers an interesting mix for eclipse watchers. There'll be two coverups of the Sun six months apart: an annular eclipse to "ring in" the new year, and a satisfyingly long total eclipse in July. Yet the tracks for both are challenging to get to, and neither makes significant landfall. The two lunar darkenings in 2010 are a partial eclipse in June and, again six months later, a total eclipse on December 20–21 — its first complete immersion in Earth's shadow since February 2008. 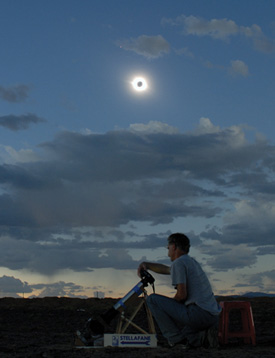 Three types of lunar eclipse are possible (total, partial, and penumbral) depending on how deep the full Moon plunges into or near the umbra, our planet's dark, central shadow. If it goes all the way in, we see a total lunar eclipse that's preceded and followed by partial phases. If the Moon skims part way into the umbra, only the partial phases occur. And if its disk passes just outside the umbra, it still encounters the weak penumbral shadow cast by Earth. (Oddly, four penumbral eclipses occurred last year.) Fortunately, no matter which type occurs, a lunar eclipse is observable anywhere on Earth where the Moon is above the horizon.

Because the Moon casts a smaller shadow than Earth does, eclipses of the Sun require observers to be in the right place at the right time. If the Moon completely hides the Sun, even for a moment, the eclipse is considered total. With its brilliant disk completely covered, the Sun's ghostly white outer atmosphere is momentarily revealed for anywhere from seconds to several minutes. However, this totality can only be viewed a narrow track or path on Earth's surface. Outside that path, about half the world is able to watch a partial eclipse as the Moon obscures a portion of the Sun.

Occasionally the Moon passes directly in front of the Sun but doesn't completely cover it. This odd-sounding situation is an annular eclipse, so-called because you can see a ring, or annulus, of sunlight surrounding the lunar disk. But an annular's path is likewise narrow, and outside of it observers see only a partial coverup.

Interestingly, up to seven eclipses can take place in one year, and the last time that happened was 1982. The fewest possible is four, as is the case in 2010. Yet any given year can have only two "central" (annular or total ) solar eclipses, and we'll have one of each in 2010.

The path of January 15th's annular solar eclipse (moving red dot) is only about 200 miles wide. A much broader area, shown in gray, will experience a partial solar eclipse.

January 15: Annular Eclipse
The year kicks off with a ring eclipse whose path falls almost mostly over the Indian Ocean. That's too bad, because the path is a rather generous 200 miles (300 km) wide, and at mid-eclipse (7:59 UT) you'd enjoy 11 minutes 8 seconds of Moon-within-Sun geometry.

The annular path begins at sunrise over central Africa, then crosses open water until it slices directly between the southern tip of India and northern Sri Lanka (at 7:51 UT, with more than 10 minutes of annularity). The shadow then makes landfall again in Myanmar (Burma) before crossing southern China and concluding at sunset just offshore in the Yellow Sea.

Most everyone in Africa and Asia will see some degree of partial eclipse. In Calcutta and Beijing, for example, the eclipse will become about 75% complete.

June 26: Partial Lunar Eclipse
The Moon's northern half will glide through Earth's dark umbra beginning at 10:17 UT and ending at 13:00 UT, with greatest eclipse occurring at 11:38 UT. This timing favors those in the western halves of North and South America, who'll see the event before moonset as dawn approaches on the 26th, as well as those in Australia and eastern Asia, who'll see it in the evening after moonrise. Think of this lunar coverup, which occurs during full Moon, as a warm-up act for the total solar eclipse that follows at new Moon two weeks later. 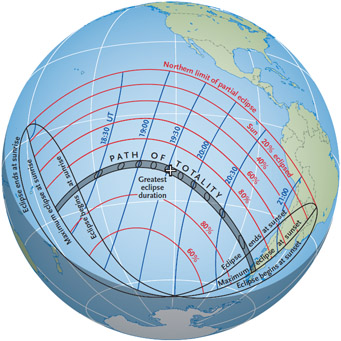 During July 11th's "ocean eclipse," the Moon's shadow sweeps across the South Pacific for 2½ hours. Red lines show the fraction of the Sun's diameter covered partially by the Moon; blue lines give the time of mideclipse along the path. Click here for a larger view.

July 11: Total Solar Eclipse
Last year eclipse-chasers headed to China and the western Pacific in droves to witness the longest total solar eclipse — 6 minutes 39 seconds — for the next 123 years. This year's reprise is also on the long side, offering up to 5 minutes 20 seconds of totality. But while the solar spectacles in 2007 and 2008 offered many opportunities to view from land, on July 11th the Moon's shadow will cross some 6,800 miles (11,000 km) of Earth's surface yet remain almost entirely on the South Pacific Ocean.

The Moon's shadow first touches Earth at sunrise well to the northeast of New Zealand, then cuts across a few of the Cook Islands. The northern edge of the path barely misses Tahiti, passing just 12 miles (20 km) to its south. To see the maximum eclipse, at 19:33:31 UT, you'd need to be in open ocean hundreds of miles from the nearest land.

Speaking of remote, the path of totality crosses Rapa Nui (more famously known as Easter Island), which is one of the world's most remote inhabited locations. If the weather cooperates, the island's 4,800 inhabitants, a throng of lucky visitors, and 887 stone statues will see the Sun covered by the Moon for up to 4 minutes 45 seconds.

The shadow's final landfall is 2,300 miles (3,700 km) farther to the southeast, along the mountainous coast of southern Chile. the only suitable viewing sites in this region is Argentina's tourist resort of El Calafate, where one might glimpse the solar corona briefly in the moments before sunset.

For more details about this event, see page 32 of Sky & Telescope's January 2010 issue. You can also check out NASA's maps and tables here.

July's total solar eclipse, as with the past few (Antarctica in 2003; Africa and western Asia in 2006; Russia, Mongolia, and China in 2008; and China in 2009) requires long-distance travel for North Americans. In fact, it's been quite a while since the continental U.S. experienced a total eclipse of the Sun. Here's a map showing future total solar eclipse paths over Canada, Mexico, and the United States through 2050. It shows that we Americans have several years' more wait ahead of us — until August 21, 2017, to be exact. 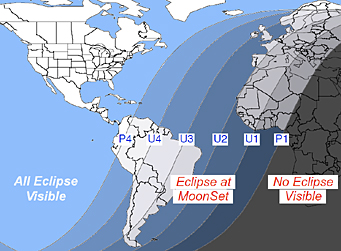 The total lunar eclipse on December 20-21, 2010, will be the first in nearly three years. North America is well placed to see all phases of this event.

December 21: Total Lunar Eclipse
Early on the solstice day (but late night on December 20th in the Far West), the full Moon will be covered completely by Earth's shadow for the first time in nearly three years. Look for the first hint of penumbral shading around 1 a.m. Eastern Standard Time (on the 21st).

The partial eclipse begins at 1:32 a.m. EST, with the first contact of the Moon with Earth's dark umbra. Totality runs from 2:40 to 3:52 a.m. EST, when the Moon will glow dimly in subtle hues of orange, red, or brown from the weak sunlight that's refracted around Earth's edge. Then partial phases resume until 5:02 a.m. EST, with the last fringe of shading fading away about a half hour later. 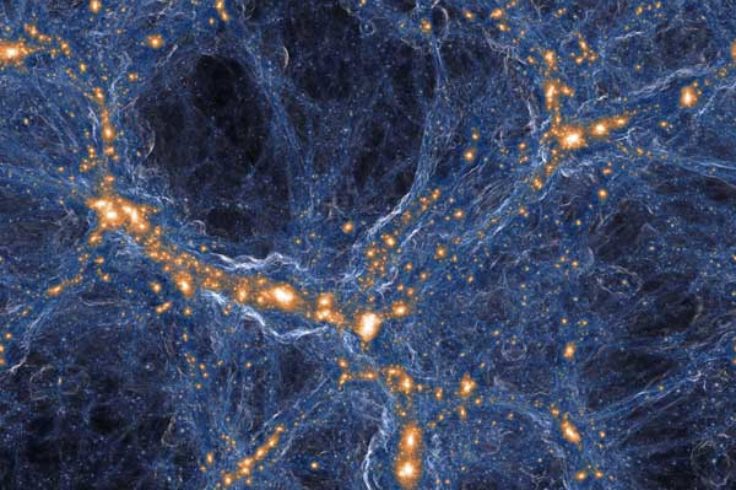 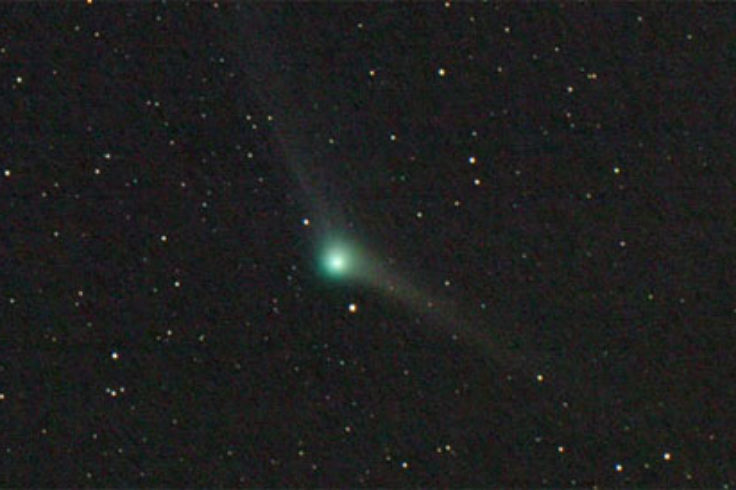