Whatever else you're doing, take some time out to observe the Moon this coming Saturday. And show it to your friends and neighbors, too.

This coming Saturday, October 5th, is both International Astronomy Day and International Observe the Moon Night. That makes sense in many ways. The whole point of International Astronomy Day is that it's a time when people with telescopes should take them out to their local street corner, town center, or other gathering point, and encourage any and all passersby to take a look at the glories of the universe. But most places where people congregate have streetlights, which make it almost impossible to see galaxies, and difficult to see even the brightest star clusters.

Not so with the Moon. The Moon is dazzlingly bright to the unaided eye and overwhelming through a telescope; it shrugs off even the worst light pollution. Its the easiest celestial body to find and one of the most rewarding to observe. Even the smallest and cheapest telescopes and binoculars show anywhere from dozens to thousands of craters and other lunar features, many of them in great detail. The average person on the street is disappointed by the views of many deep-sky objects, but I have never once met anyone who was disappointed by his or her first telescopic view of the Moon.

It's true that the Moon is currently unfashionable in the amateur-astronomy community, because its glow hides faint stars and deep-sky objects at otherwise dark sites. But observing the Moon itself is endlessly fascinating. That's particularly true when it's close to half-lit, because that's when the terminator -- the line between lit and unlit -- sweeps fastest across the face of the Moon. If you watch carefully for a while, you should see points of light suddenly kindle on the dark side of the terminator, and then grow, and perhaps eventually even merge into the fully-lit part. What you have seen is sunlight hitting first the top of a mountain, then sweeping down its slopes, and finally illuminating the plain upon which the mountain rests.

As a huge side-bonus, Saturn and the Moon are in conjunction this evening. They're closest around 8 p.m. Universal Time, which is great for observers in the Old World but not so good for the Americas. In fact, the Moon actually occults (hides) Saturn as seen from parts of Africa. Enterprising observers in the Americas might want to catch the Moon-Saturn pair when they're closest, in the afternoon. This is a rare opportunity to find Saturn easily in broad daylight, with the Moon as a marker. In the early evening Americans will still see the Moon within two to four degrees of Saturn, fitting easily together in a binocular field of view. This is a perfect chance to show the general public the sky's two most spectacular objects side by side.

So even if you customarily avoid the Moon, make a point of going out to view it on Saturday. And encourage all your friends, relatives, and neighbors to take a look too. What could be a more fitting way to celebrate the 50th anniversary of the first human footsteps on the Moon?

My astronomy club was scheduled to have our monthly public program on Mount Tamalpais Saturday night, but the event was cancelled because of high fire danger. So I set up my little refractor on the sidewalk in front of my home in San Francisco's Mission district and showed passersby Jupiter, Saturn, and the Moon. People were very interested and appreciative. One homeless guy who was staying on the sidewalk in front of the church across the street said he had never looked through a telescope before. He was especially fascinated to see craters on the Moon. When other people came along he stepped aside, told them to be careful not to touch the lens of the eyepiece, explained that Saturn is much bigger than the Moon but it looks smaller because it is much farther away, etc. It warmed my heart.

Anthony, your outreach sounds great. I was out on Friday night observing Saturn, the waxing crescent Moon, Jupiter along with M15 and M31. I posted some comments on the Sky this week section. Observing Saturn, I could clearly see its shadow on the rings. Today, Saturn is at eastern quadrature so the shadow on the rings is very noticeable and you get a great, 3-D view of the planet and rings. I have clouds and possible rain here in Maryland tonight but later in October, I hope to enjoy more clear skies. Friday night when I started observing Jupiter shortly after 7:00 PM, I could see the Great Red Spot near the limb, the GRS transited earlier near 5:41 PM that evening. I am out in farming area and no one else around except the geese, owls, and deer. When I shine my red light into the woods, little eyes are staring back at me 🙂 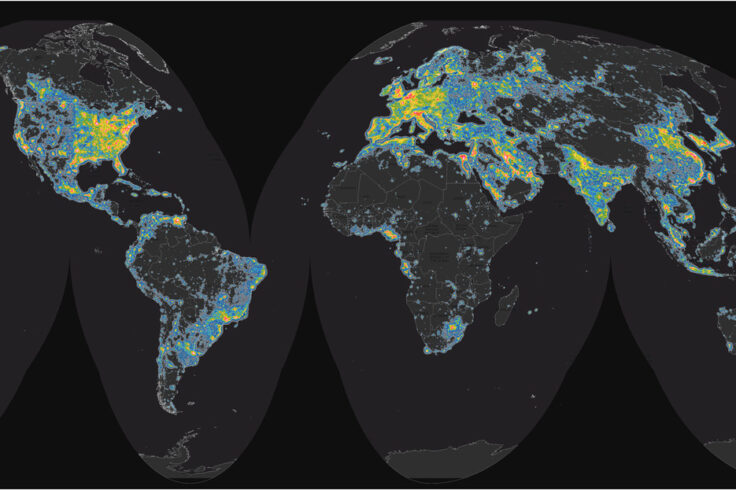 Astronomers Dim Street Lights to Home in on Light Pollution