Want to gaze at the Milky Way all night or peer into the eyepiece of a 12-inch telescope? Escape the city lights and head for the nearest big amateur nighttime gathering. 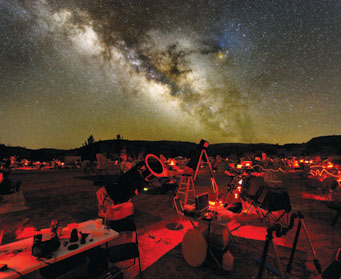 Every year the Texas Star Party draws about 500 deep-sky enthusiasts and their telescopes to the Davis Mountains of West Texas, one of the darkest areas in North America.

Every winter here in New England, my yard has snow cover more or less continuously from December through March.

So by the time summer rolls around, I am more than ready — not only for a little warmth, but also for the chance to join like-minded skywatchers at a regional star party or two. Sure, observing solo has its special rewards. I can commune with the universe in quiet contemplation. But I still love looking out over a field that's flush with telescopes of every size and description.

For northern skygazers, summertime is "star-party season." Chances are good that astronomy-club members in your area will be coaxing you to join them at a choice location far from the pall of urban light pollution, in order to to steep themselves in darkness for a few precious nights.

Snowdrifts notwithstanding, I'm doubly fortunate to live in New England. First, I'm just a few hours' drive from the Northeast Astronomy Forum, hosted each April by the Rockland Astronomy Club and co-sponsored by Sky & Telescope. NEAF has grown from modest beginnings in a Holiday Inn banquet room back in the early 1990s to what is arguably the largest showcase of astro-goodies on the planet. I always have to keep a close watch on my wallet! 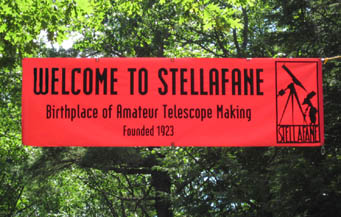 A colorful banner greets attendees to the annual Stellafane Convention, held each year in Springfield, Vermont.

Second is that I'm likewise not far from Springfield, Vermont. Each year more than 1,000 skywatchers make the pilgrimage to Breezy Hill on the town's outskirts for Stellafane, the granddaddy of all star parties. At Stellafane, which loosely translates as "shrine to the stars," the art of telescope making got its start in the 1920s, and backyard astronomers have flocked to this hallowed ground ever since.

Whether big or small, star parties often provide a tried-and-true mix of informal talks and activities during the day, followed by late-as-you-want observing at night. While some events still draw a contingent of serious astrophotographers (with red-light-only rules strictly enforced), most have morphed into family-friendly gatherings that put more emphasis on camaraderie and casual observing.

I've listed below a selection of major events to be held across North America in the months ahead. Also check out SkyandTelescope.com's more complete listing, which includes dozens of events with a link for each. Another important resource is NASA's Night Sky Network.

For the last word on star parties, visit S&T.com's Event Calendar. (Note to club officers: make sure your event is listed and up to date!)

Kelly,
Will you be at NEAF on Sunday?
I will be manning the Dudley Observatory booth that day.
Hope to see you again.

I looked at all the links posted, & it is really disappointing to see how few events are listed, or in some provinces none at all!, in Canada. For any other readers interested, there are some clubs listed here: http://www.skynews.ca/pages/clubs.html

I'm surprised that the annual Connecticut Star Party was not even in your list. Every September around the new moon weekend the Astronomical Society of New Haven runs a wonderful family oriented event open to the public. CSP is celebrating it's 21st year of service to the astronomical community this year on September 23, 2011 under the beautiful dark skies of Ashford CT. CSP is a fun family event with speakers, science activities, random music and lots of fun for all. We've even had several folks from S&T speak at our event. CSP is held at J.N. Webster scout camp, where there are miles of trails and several fields available. Clean, up to date facilities including several bunk houses, his & hers hot showers and a huge mess hall. It's not as large as Stellafane which makes it more cozy and friendly. Oh, also there are raffles with excellent prizes for adults and children. We hope you'll check CSP out! Try it, you'll like it.

Anyone know of any star parties (big or small) in or near Northern Illinois/Southern Wisconsin? I'm only twenty miles from Yerkes Observatory in Williams Bay, WI.

Here's a link to the Swiss Starparty August 17th-19th 2012:
http://www.teleskoptreffen.ch/starparty/upcoming.en.php