Jupiter’s cloudtop “surface” is a lively place that has kept telescopic observers busy for centuries. The planet’s dark belts and light-hued zones change their appearance and sprout new features frequently. In the past, keen-eyed Jupiter observers eyeballed the comings and goings of new features, but these days much of the monitoring is done with high-quality CCD images obtained by amateur astronomers. 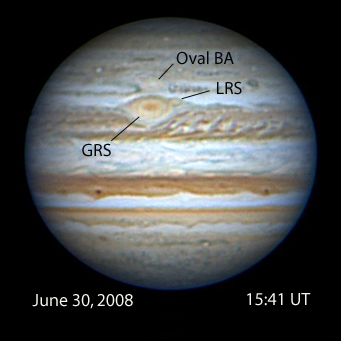 Several days ago, Jupiter's Little Red Spot (LRS) was well separated from the Great Red Spot (GRS) and Oval BA, but closing in on them.

One newly discovered feature is the little red spot (LRS), which was first identified by John Rogers, British Astronomical Association’s Jupiter Section director. As Rogers recounts, “This spot appeared last winter while Jupiter was hidden behind the Sun. I noticed it on March 1st in images taken by amateur astronomers Tomio Akutsu in the Philippines and Anthony Wesley in Australia. Such spots in the South Tropical Zone (STrZ) are very rare.”

Since LRS’s discovery, the currents of the STrZ have carried it inexorably toward the Great Red Spot. Jupiter watchers wondered what would happen to the small spot when it encountered the GRS and the adjacent Oval BA (Red Spot Junior). The moment of fate arrived on July 3rd, when the LRS tried to squeeze through the narrow gap between the GRS and adjacent Oval BA like dough through the rollers of a pasta machine. 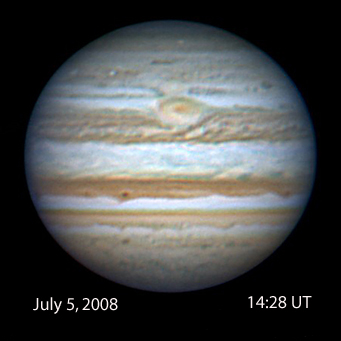 By July 5th, the Little Red Spot was trying to squeeze between the Great Red Spot and Oval BA. It remains to be seen what will happen next.

As of this date, the little spot’s ultimate fate remains unclear. The July 5th image by Japanese amateur Isao Miyazaki (seen here) and those by Wesley and others offer tantalizing hints that some material from the spot may have survived, perhaps destined to re-form on the other side of the GRS. One thing is certain — the nights ahead will be interesting ones for Jupiter observers!

Atmospheric features like the LRS provide scientists with valuable clues about the dynamics and composition of the Jovian atmosphere. Camille Carlisle’s May 28th report neatly summarizes some of the scientific interpretations.

Currently Jupiter is situated in eastern Sagittarius and visible all night long. The giant planet reaches opposition on July 9th. Under steady viewing conditions, a 4- to 6-inch telescope will show Jupiter’s Great Red Spot quite well, though larger instruments will likely be needed to detect whatever might remain of the LRS. Look on the following edge of the GRS, which is currently near Jovian System II longitude 121°. (Transit times for the GRS are given in the July issue of Sky & Telescope, page 66, and also here.)