From Earth’s point of view, Mars is unique. It’s the most Earthlike world we know; backyard telescopes can sometimes show polar caps, surface markings, seasonal white clouds, and windblown dust. Mars also behaves uniquely in our sky. It spends most of its time far away as a tiny blob in a telescope, then every 2.1 years it swings much closer for just a few months around opposition.

Moreover, Mars comes almost twice as close at some oppositions than at others (because Mars has a significantly elliptical orbit that is also near Earth’s orbit). The near and far oppositions (“perihelic” and “aphelic”) come and go in a 16-year cycle. 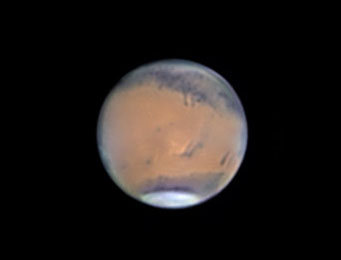 Mars's north polar cap was still dazzlingly prominent, and dark Mare Tyrrhenum was prominent in the south, when Bill Flanagan of the Houston Astronomical Society took this image on January 22nd. The image is south-up to match the view from Earth's Northern Hemisphere in a reflecting telescope.

We’re now near the bottom of that cycle. Mars reaches opposition and makes its closest approach to Earth in late January 2010. But it appears only 14.1 arcseconds in diameter at the time. Mars will appear larger than 12? through the end of February, and larger than 10? through late March (see the graph on the bottom). That’s pretty small.

But astronomy is all about making the most of very distant, difficult views. And at least Mars will cross the night sky high for Northern Hemisphere observers. It spends the next five months in and near Cancer, at declinations +16° to +23°.

In a good 4-inch or larger telescope on a night of steady air, you may first make out the bright north polar cap. In February or March you may notice the cap shrinking in the Martian northern spring. Dark surface markings may be harder to discern, depending on which side of Mars is facing Earth when you look. Watch also for bright limb hazes, occasional white clouds, and possibly the obscuring bright patch of a dust storm moving from day to day. But don’t expect impressive views. Every bit of what you see will be a hard-won prize.

It’s one thing to detect a vague smudge or two on Mars’s tiny disk. The smudges become much more exciting if you can identify and name them. Use our Mars Profiler to find out the names of the features on the side of Mars that's facing you. 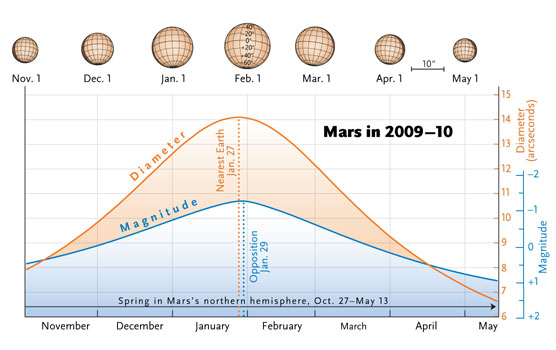 The Frozen Plain of Pluto