If it's clear at dawn on Monday and Tuesday, February 28th and March 1st, you can see one of nature's loveliest sights — Venus near the thin crescent Moon. 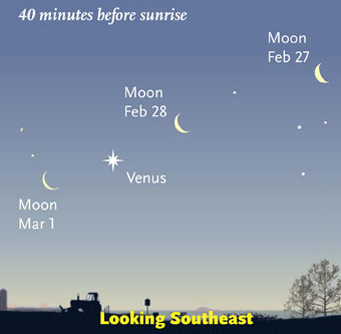 Look southeast before sunrise to spot the waning Moon and Venus. These scenes are drawn for the middle of North America. European observers: move each Moon symbol a quarter of the way toward the one for the previous date. For clarity, the Moon is shown three times actual size.

Thoughtful readers looking at the chart at right might have two questions. First, if the Moon is above Venus on Monday and below it on Tuesday, it must be very near it some time in between. When will this close approach happen, and where will it be visible?

Second, just how long into dawn will you be able to see this scene? The Moon is often visible during broad daylight. Is that true of Venus, too?

Let's answer the second question first. Yes, Venus is indeed visible to the unaided eye during broad daylight, assuming that the air is reasonably free of haze. In fact, it's startlingly easy to see — but equally hard to find. It's just a tiny pinprick of light amid the vast sea of blue sky. Even after you succeed in finding Venus, it's very easy to lose sight of it if you glance away for a moment.

For this reason, by far your easiest chance to observe Venus during the day is when it happens to be near the Moon — a much easier object to find. And that will happen twice for observers in the Americas: on Monday and again on Tuesday.

There's one way to be absolutely sure of observing Venus after the Sun has risen, but it requires a lot of time and patience. Go out a half hour before sunrise, when Venus is blindingly obvious, and track its position until the Sun rises, and even after. The way to do this is to periodically look down from Venus to the horizon, and see what landmark lies directly below it. Then it's relatively easy to relocate Venus by scanning upward from that landmark. 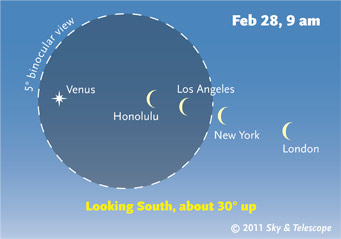 In these daylight scenes, the Moon is shown its actual apparent size relative to the distance between it and Venus. Venus is shown bright here for clarity, but appears much fainter against the bright daytime sky. Binoculars are not necessary to see either the Moon or Venus, but they're extremely helpful.

If you don't want to hang around outside for 45 minutes on a chilly late-winter morning, your second-best bet is to look when the Moon and Venus are due south and at their highest, which happens around 9 a.m. these mornings. Bring binoculars, because even the Moon is none too easy to spot during the day when it's a thin crescent.

Once you've located the Moon, use your binoculars to scan carefully to the left on Monday morning, using the February 28th diagram to tell you how far to scan. Most 7× to 10× binoculars actually have a field of view a bit bigger than what's shown, but the outer edge of the field is often a little hard to see. 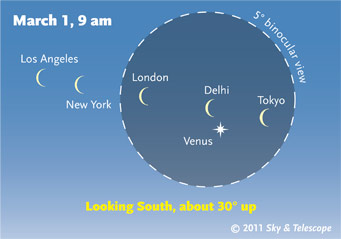 n these daylight scenes, the Moon is shown its actual apparent size relative to the distance between it and Venus.

The closest approach between Venus and the Moon takes place when the Moon is below the horizon for the Americas. But it's a fine sight from eastern and central Asia, as shown in the March 1st diagram. By the time the Moon rises in the Americas on Tuesday morning, it's already well to the left of Venus. This is a second opportunity to spot Venus during daylight hours, but it's a bit tougher than on Monday because the Moon's phase has shrunk from roughly 15% to 10%, making it significantly harder to spot in the blue day sky.

Wow Keeping my Camera ready and batteries charged to capture this rare and beautiful opportunity. Being at Delhi sight would be even more breathtaking.
Let see how Venus looks during broad daylight !!

Wow I had to rub my eyes when I seen the most brilliant sight this morning on the way to work took some research for me to find out what it was. Very gorgeous a sight to behold from Norwood Ma. plain as day twinkling vibrantly next to the sliver of a moon at 5:40 am simply magnificent draws me back to my curiousity for astronomy as a teen. Wow. Beautiful.

We had cloudy weather on Monday, 28-Feb-2011, but it was sparkling clear on Tuesday, 01-March. This sighting opportunity slipped my mind until about 1 pm local time (EST here in NJ).I used SkyTools to establish the general positions of the Moon and Venus, and went out for a look. They were about 18 and 12 deg high in the southwest.

I could not find either object naked eye, but he moon was easy to spot with 10x42 binoculars, and after finding it, I could see the crescent naked eye. No luck with Venus.

I then tried my 16x70 binoculars, and Venus was prominent once spotted (it was necessary to scan slowly; if I moved the big binos quickly, it vanished). Knowing the spot, I was then able to find Venus in the 10x42s, but still not naked eye.

Thanks for the heads-up!

Using my Planetarium for Palm (http://www.aho.ch/pilotplanets/) to point me to the moon at 9:00am EST on Tuesday, I spotted the pale moon and then used my 8x20 IS binoculars to find Venus. It looked brighter than the moon, but the moon's larger size made it easier to see. I tried to show it to a co-worker, but he couldn't pick out the moon even when we used nearby streams of clouds to point in the right direction.

After reading this article, I grabbed my 16x50 binoculars, and went looking, around the Moon for a little spark of light, it was about 11 am, (MST), and I finally found it. It was a breath-taking sight in the binoculars, but I decided to take a closer look. So I got my telescope out, and was even able to see it's phase, the Moon itself was also a pleasure to observe.

Location: Caerphilly, South Wales
Date: Saturday 25 February 2012
Time: 15:30 UT
Bright blue clear sky.
The sun had gone behind the hedge at the back of the house.
Could see moon but unable to locate Venus.
Got out binoculars, found such a bright light, amazing.
Then saw it with naked eye.
RESULT!
Will try again at the end of March when Jupiter will be close by, let's hope for a fine day.