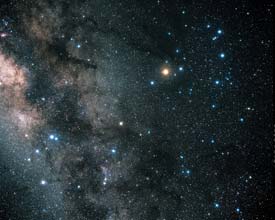 There's lots to see every night of the year as the vault of stars wheels overhead.

The night sky is an ever-changing vista, though to the casual observer this might not seem to be the case. After all, at 10:00 tonight the stars will appear about the same as they did last night, or even last week. But look carefully and look often — and soon you’ll discover an ever-changing universe unfolding overhead.

In SkyWatch '06 (available via Sky Publishing), you'll find the article "Celestial Symphony" — an evocative piece that'll introduce you to some of the deep-sky wonders visible each season. Also in the issue is "A Year of Celestial Sights," a list of 60 fine celestial sights visible during 2006 (many can be seen without optical aid). Below are some links to a number of relevant pages on Sky & Telescope's Web site.

An eclipse of the Sun or the Moon is a rare and beautiful sight. The cause of each type of eclipse is essentially the same: the Sun, Earth, and Moon form a straight line in space with Earth’s shadow falling on the Moon (a lunar eclipse) or the Moon’s shadow touching Earth (a solar eclipse). However, the visual result is strikingly different. Our eclipse page will tell you when and where to see eclipses and how to observe them.

At one time or another, almost everyone has glimpsed a bright streak of light — a meteor — dashing across the night sky. These sudden celestial visitors are commonly called falling or shooting stars. At certain times of the year our planet slices through streams of dust and dirt left behind by passing comets. When this happens Earth experiences a meteor shower, and you might see meteors at a rate of one every few minutes, though there are often bursts and lulls.
Learn more about observing meteors and meteor showers on our meteor page.

Every month as the Moon glides eastward through the sky, it passes some of the bright, naked-eye planets. Occasionally two or more planets gather in one part of the sky; if they’re close, this is called a conjunction. These celestial meetings can be attention-grabbing sights and are often fine astrophotography opportunities. To keep informed of these and other celestial events that may be of interest, consider bookmarking the page called This Week's Sky at a Glance.

Finaly, as the Moon moves through the sky, it occasionally occults (passes in front of) a planet, star, or other celestial body, snuffing out its light. The object reappears on the Moon’s opposite side up to an hour later. More information about occultations in general is available on our occultation page. During 2006 the bright stars Spica and Antares and the Pleiades Star Cluster are occulted 13 times each, Uranus 11 times, Venus and Mars twice each, and Saturn once. On the next two pages is a summary of these events.

* The full or nearly full Moon may make observing the event difficult.

* The full or nearly full Moon may make observing the event difficult.