Late word out of the IAU's Minor Planet Center: a small asteroid will pass close to Earth tomorrow (March 2nd) at 13:44 Universal Time. How close? The MPC's Timothy Spahr calculates that it'll be 0.00047 astronomical unit from Earth's center. That's only about 40,000 miles (63,500 km) up — well inside the Moon's orbit and roughly twice the altitude of most communications satellites! 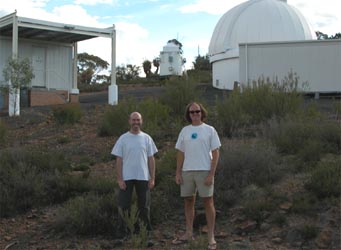 This little cosmic surprise, designated 2009 DD45, turned up two days ago as a 19th-magnitude blip in images taken by Rob McNaught at Siding Spring Observatory in Australia. It was already within 1½ million miles of Earth and closing fast.

Thankfully, the news media have become less sensationalistic when it comes to these asteroidal close calls — especially since one actually struck our planet last October 7th, at night, and the impact went virtually unnoticed.

So why post this? Well, we figured someone might want to watch it zip by at up to a half degree per minute! Even though it's small, likely no more than 100 feet (30 meters) across, it'll brighten to magnitude 10½ at its closest — easily within reach of an 8-inch backyard telescope. That's the good news.

A sequence of four images reveal the motion of asteroid 2009 DD45 (at center) over 36 minutes during its discovery on February 27th.

The bad news is that the point of closest approach occurs over the Pacific somewhere west of Tahiti, so the most likely viewers are in Australia, Japan, and maybe Hawaii. Sure, you could look before or afterward, but it'll be brighter than 13th magnitude only for a few hours.

If you want to give it a try anyway, you'll need to generate an ephemeris of positions for your specific location, due to the wide parallax of an object so close to Earth. And if you manage to spot it, be sure to add a comment below to let us know.

if you have a reference on how to view this in stellarium it would give me a great way of discovering it.

Stellarium does not have this built in. You'll need to add the following to your SSYSTEM.INI file.

This information is specifically for Stellarium 0.9.x. If you're using the newer 0.10.x version, you need to change the parameter sidereal_period for orbit_visualization_period.

You've not indicated your version or platform so I cannot give more details..

If you need more assistance working with Stellarium, you should put further questions to the their forum.

I just added it. It's a fast mover!