There's star parties and star parties — and then there's Stellafane. Inaugurated in 1926, the Stellafane Telescope Makers' Convention is probably the longest-running star party in North America, if not the world. 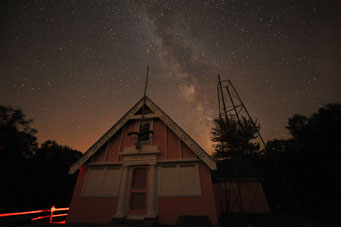 It's loaded with history and held at a beautiful site — the top of Breezy Hill, near Springfield, Vermont.

Breezy Hill is classic New England. There are a few truly spectacular spots on the New England coast or in its higher mountains, and Breezy Hill isn't one of them. It's not even truly dark. The glow of nearby Springfield is obvious to the northeast, and even distant Boston's skyglow can be made out far to the south-southeast. But it's dark enough to see the Milky Way quite nicely, thank you. And from the top, wave after wave of green hills stretch endlessly to the horizon. Not spectacular, but altogether lovely. 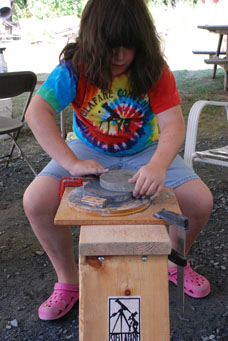 I missed this year's convention, for reasons that will feature in next week's blog. (I was under far better skies in California.) But S&T's other editors showed up en masse as usual, and they assure me that this was the best Stellafane in recent memory, with three nights of superb, transparent skies.

Click here to see a fine video of the 2010 Stellafane Convention from the Stuck in Vermont blog. Or see the photo album from Dick Koolish, one of the fellow members from my own astronomy club, the Amateur Telescope Makers of Boston.

In case you're wondering: It's no accident that I share a name with the Flanders Pavilion. The initial donation for the Pavilion was made by Aunt Frances to honor my great uncles Ernest and Ralph, both of whom were charter members of Stellafane. Needless to say, I've made my own donation, too. How about you?

Thanks for the report, Tony. Sorry to have missed Stellafane and all the S&T editors this year! I was entertaining friends nearby at my cabin...but certainly enjoying the stars in the clear dark skies of NH. Hope to see you next year!

This year's Stellafane was another excellent convention. There were a number of impressive entries in the telescope competition (two fellow DVAA members won awards), a plethora of interesting talks, and three fine nights of observing, just like the 2009 convention. I had some superb nighttime views through a number of telescopes, including Al Nagler's 127mm apochromat and John Vogt's 32-inch Dob (NGC 6960 was simply incredible) and some great views of the Sun through George Normandin's 127mm ED refractor and Herschel wedge and a double Coronado PST and Lunt H-alpha rig.

A point of clarification: the Baader Herschel Safety Wedge Solar Prism and Solar Continuum filter that George was using were on loan from Sky & Telescope.