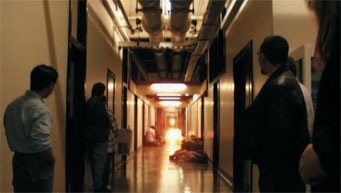 On a few days each year, direct sunlight enters windows and reaches all the way down this 825-long hallway at MIT.

For much of the day (and night) the hallways of the Massachusetts Institute of Technology bustle with students, instructors, and researchers. But on a few late afternoons in January and November, one particularly long thoroughfare seemingly empties. Its inhabitants pause and part like the Red Sea as others gather near a stairwell at the eastern end of the corridor.

If the weather cooperates these lucky people see the Sun shine through a window barely visible in the distance. The astronomical alignment has been compared to England's famed Stonehenge so many times that the solar phenomenon has earned the name MIThenge. In 2011 it's forecast to occur from January 28-31 and November 10-13.

Click here to download a PDF of the complete article on MIThenge from the November 2003 issue of Sky & Telescope.