This composite shows the Moon just after the beginning of totality (right), at mideclipse, and just before totality ended (left). The final out of the 2004 World Series happened in the middle of the left-hand frame’s 8-second exposure.

Fate smiled on Boston on Wednesday, October 27, 2004, (October 28th Universal Time). The low clouds that had covered the area all day began to break up at sunset, giving wonderful though slightly intermittent views of the last total lunar eclipse until 2007. And moments before the end of totality, the Boston Red Sox won baseball’s World Series for the first time since 1918.

Scattered clouds seemed to be the norm across most of the visibility zone, which included the eastern parts of Europe and Africa and almost all of the Americas. Opinions varied considerably on how dark the Moon was at mideclipse. Most of the editors at Sky & Telescope agreed that it was only moderately bright, but the well-known eclipse watcher Joe Rao placed it near the top of his personal list both in terms of brightness and color. There seems to be a slight bias depending on the cloud cover; people who got long continuous views (as did many observers across New England) usually thought it was darker than those who glimpsed it through holes in the clouds. Some skeptics have also suggested that Boston observers’ dark adaptation may have been destroyed by following the Red Sox too closely on television! In any case, the Moon was certainly darker than it was at mid-totality in November 2003, when it skimmed through the outer edge of Earth’s umbra. And the colors were indisputably magnificent, ranging from a whitish or bluish tinge at the brightest edge to a deep red or rich brown near the center of Earth’s umbra. The eclipse was rated anywhere from 2 to 4 on the Danjon scale, with the Moon’s magnitude at totality between –1 and –3. 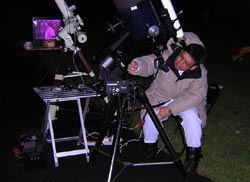 Like many other New England eclipse watchers, Sky & Telescope associate editor Edwin Aguirre kept an eye on the ballgame as he observed, and photographed, the lunar eclipse.

Skies were overcast at St. Louis, Missouri, where the World Series game was being played, but television cameras did manage one shot of the Moon during the partial phase. This was the first total lunar eclipse ever to occur during a World Series game; the next likely opportunity won’t occur until October 29, 2050.

On average, lunar eclipses (partial or total) happen twice a year. We’ve been lucky recently, with four total eclipses in the last 19 months, but we’re coming up on a totality drought, with the next one scheduled for March 3, 2007. That eclipse will be seen best in Europe, Africa, and western Asia, but part of totality will be visible from most of Asia, all of South America, and the eastern half of North America.