December is the month of the solstice, when the Sun appears farthest south in the sky. That means winter for us and summer for Australians. This year the December solstice comes at 12:11 p.m. on the 21st.

It's also the month of the annual Geminid meteor shower, which this year will be at its best on the night of December 13th. Ordinarily you can count on the Geminids to give a pretty good show, maybe one meteor per minute from a really dark location. But this year there’ll be a lot competition from a big, bright Moon in that part of the sky. 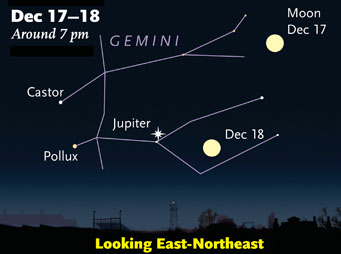 During December, Jupiter rises in the east amid a crowd of bright stars — in mid-evening as the month begins but not long after sunset later on.

Planetwise, the diamond-like beacon hanging low in the west after sunset is Venus. It’s dazzling and unmistakable — in fact, right now Venus is shining as brightly as it possibly can. Meanwhile, over in the east, look for Jupiter shining brightly midway between Gemini and Orion. Throughout December Jupiter is nearly as bright as it can get. Even the dazzling stars of Orion pale by comparison.

A great many skywatchers will be up before dawn in early December looking for Comet ISON. From about the 7th to 11th, the comet — or whatever is left of it after a close brush with the Sun — appears progressively higher in the eastern sky as twilight begins..