February is often the coldest month of the year for northerners, but the Sun is telling a different story. The December solstice came and went several weeks ago, and during February the Sun races northward among the stars by about 1° every 3 days.

For now, though, the stars of winter are in control of the nighttime firmament. There are a bunch of bright beacons in the eastern evening sky, but two of them — the planet Jupiter and the star Sirius — stand out much more obviously than the others. 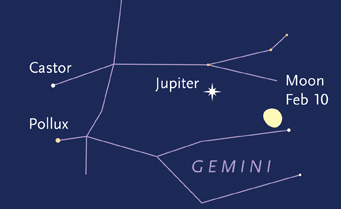 Jupiter, in the east after sunset, is intertwined with the stars of Gemini. A nearly full Moon joins the party on February 10th.

Right now Jupiter is nestled amid the stars of Gemini, the Twins. They’re lying sidewise as they rise in the east, with their heads marked by Castor and slightly brighter Pollux not far to Jupiter’s left. Sirius is to Jupiter’s lower right by about four times the width of you clenched fist held at arm’s length.

To Jupiter's right is the red supergiant star Betelgeuse, which marks Orion’s left shoulder. Betelgeuse is the center of a huge asterism, the Winter Hexagon, that includes the stars Rigel, Sirius, Procyon, Pollux, Capella, and Aldebaran. This year Jupiter is an interloper along the hexagon's left side.

If you're dressed for the cold, February is a great month to take a visual walk around the evening sky. To guide you, download this month's 6¼-minute-long audio audio sky tour.