June begins with Moon-free evening skies. New Moon comes on the 8th, and Full Moon on the 23rd. Algonquin tribes called this the Full Strawberry Moon, to mark the peak season for harvesting those sweet delights. But Europeans knew it as the Rose Moon.

In early June, if you've got a clear view toward the western horizon, you'll see something of a planetary traffic jam just above the sunset point. Jupiter is spending its very last days in the evening sky, but Venus is rising to take its place. And Mercury is making its best evening appearance of the year. 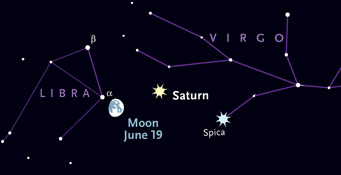 During June, Saturn is positioned between Spica to its west and the two brightest stars of Libra: Zubeneschmali (labeled β) and Zubenelgenubi (labeled α).

Meanwhile, there's another bright planet in the sky, and that's Saturn. To find it, face the direction of sunset and then make a generous left turn, to face south. You'll see two bright stars about halfway up. They're separated by about the width of your fist with your arm outstretched. The brighter one, on the left, is Saturn.

Saturn is situated along the zodiac, perched in eastern Virgo not far from the hard-to-find constellation Libra. To find out how to spot Libra — and other sky sights — download this month's 6-minute-long audio sky tour.