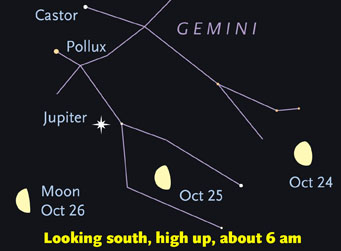 Jupiter rules the late-night sky in October, and it's joined by a bright gibbous Moon late in the month.

Jupiter pops up in the east around midnight on October 1st and two hours earlier by month’s end. Around 6 a.m., you’ll find it very high up, cavorting with Gemini's Twins and to the upper-left of the majestic constellation Orion.

Meanwhile, that unmistakable beacon low in the southwest after sunset is the planet Venus. Not far to its left is Antares, marking the heart of Scorpius, and well to its upper right is the bright summertime star Arcturus, gradually sinking night by night in the northwest.

Swing right to face north. You’ll see that the "W" of Cassiopeia and the Big Dipper are situated on opposite sides of the North Star. The Dipper dominates in spring and summer, while Cassiopeia rules in fall and winter.

There's a barely-there lunar eclipse on October 18th. To get details about it — and to find out about other sky sights — download this month's 6½-minute-long audio audio sky tour.