From the city lights nestled between Alpine peaks to a single image that captures stars, an aurora, and a meteor, The World At Night's 2013 astrophoto contest is full of startling vistas.

In many ways exploring the night sky is like an adventure trip to an unseen cave or savoring a mountaintop vista that few others have witnessed. But there's greater enjoyment when you share the experience with others. That's the essence of The World at Night (TWAN) program and its Earth & Sky Photo Contest on Dark Skies Importance.

The otherwolrdly feel in "Crossed Destinies" was captured over the Indian Ocean island of RÃ©union. Click here for a larger view.

Unfortunately, with two-thirds of the world's population living in light-polluted areas, the night sky might become a forgotten part of urban life. So TWAN's annual contest, now in its fourth year, strives to make an impact on public awareness of beauty of night sky as part of our nature and importance of preserving dark skies from increasing light pollution in our often libertine modernity.

Contestants from 45 countries submitted a remarkable 700 images, all taken since the beginning of 2012. This is double the count from last year — yet another sign that public interest in the night sky and the hobby of astrophotography is growing. As noted by one of our distinguished adjudicators, David Malin, "The entries represent some of the best TWAN-style photographs ever gathered together in one place. Judging them was a significant challenge because the standard was very high."

Submitted photos were judged in two categories: Beauty of the Night Sky and Against the Lights. Each category had five winners, and 50 other notable photos are featured in our contest video. All images were created with a landscape style that combines elements of the night sky with a notable location or landmark. The images were submitted during the just-ended Global Astronomy Month.

A strong example of how natural beauty of night sky can affect people is the winner image "Crossed Destinies" by Luc Perrot from the French island Réunion (near Madagascar). The outstanding Milky Way above Indian Ocean has no hint of our modern world, either in the sky or on the land. 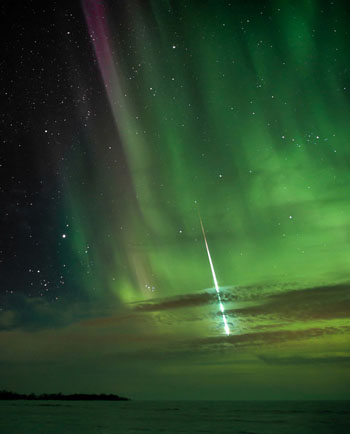 In "Meteor Magic", Shannon Bileski captured stars, an aurora, and a fireball over Manitoba. Click here for a larger view.

Another winner is a lucky and well done photo by Shannon Bileski of Winnipeg, Canada, in which the starry sky, an aurora storm, and a streaking fireball are captured in one frame. What else do you need in a stargazing night?!

We were pleased to see Shannon among our winners. At my workshops around the world, I meet many dedicated and advanced TWAN-style photographers — but few of them are female, even though women are quite active in other fields of photography. My colleague Mike Simmons, founder of Astronomers Without Borders, comments, "TWAN-style photography is meant to be accessible to everyone on Earth, and the all-male nature of the field to date is contrary to that ideal."

In the Against the Lights category, first-place winner "Under the Hood" is all beauty at first glance. But then you realize that photographer Andreas Max Böckle has moved to the mountaintops outside the city of Salzburg to separate himself from light pollution. Trapped beneath the yellow light cast, Salzburg's residents are no longer able to see this celestial beauty. (The International Dark Sky Association offers much more information about fighting light pollution.) 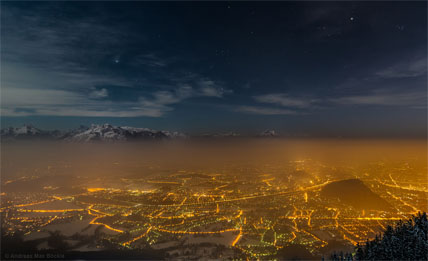 Thin clouds add drama to the stars above and the blanket of city lights below in Salzburg, Austria. Click here for a larger view.

This year an Austrian also won the Summer Solstice Festival photo contest, as was the case in both 2011 and 2012. It's partly because alpine vistas offer some of the last remaining natural starry skies in the western Europe, and partly because city lights nestled in mountain valleys make an eye-catching contrast to the sky above. But Austrian amateur astronomers have been very active in all kinds of advanced astrophotography in recent years. They organize the Central European Deep Sky Imaging Conference every other year in Linz, Austria, which brings together astrophotographers from around the globe.

TWAN organized the Earth & Sky Photo Contest in collaboration with education/outreach specialists at the National Optical Astronomy Observatory. While most of the judges are TWAN members, we also invited astroimaging experts. Among them this year was Jerry Bonnel, a scientist at NASA's Goddard Space Flight Center and co-editor of Astronomy Picture of the Day (APOD).

For those who want to participate in our 2014 contest, I recommend that you start now! The entries will be images made between January 2013 and April 2014. Good luck, and clear skies!

Babak A. Tafreshi is a freelance photographer, science journalist, and astronomy communicator. He is founder and director of The World at Night (TWAN) program, a board member of Astronomers Without Borders, and a contributing photographer for Sky & Telescope.