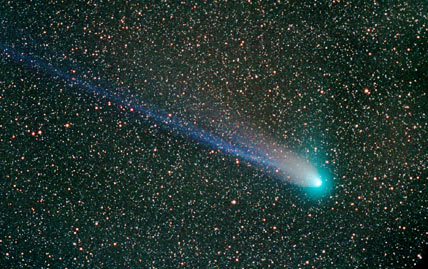 Comet NEAT was high in the evening sky on May 8, 2004, when Chris Schur caught it with an 8-inch f/1.5 Schmidt camera on Supra 400 film. He took this 5-minute exposure under a very dark, transparent Arizona sky at an elevation of 6,800 feet. 'The comet had a 2° tail to the naked eye,' he writes, 'however, in binoculars over 7° of tail was seen without much effort. Three tails are seen here: a greenish tail pointing upward, a blue ion tail, and a brownish dust tail. The green tail points away from the Sun.'

After putting on a nice show for Northern and Southern Hemisphere observers, Comets NEAT and LINEAR are currently moving away from the Sun, fading as they go. They will continue to be visible from various latitudes on Earth— with binoculars and possibly the naked eye — for the next few weeks. Frequent updates on the comets' brightnesses and visibility, including when and where to look, can be found in Sky & Telescope's online column This Week's Sky at a Glance.

Comets C/2001 Q4 (NEAT) and C/2002 T7 (LINEAR) were discovered in August 2001 and October 2002, respectively, by the automated sky-survey programs for which they’re named: Near-Earth Asteroid Tracking (NEAT) and Lincoln Laboratory Near Earth Asteroid Research (LINEAR). Amateurs tracked the comets with telescopes for more than a year as they approached the inner solar system and gradually brightened. While they didn't live up to astronomers' early brightness predictions, both comets still put on a pretty show and were easily visible to the naked eye from dark-sky sites around the world. 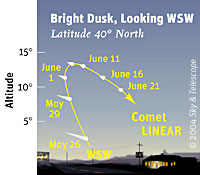 After it ducks back around the Sun, Comet LINEAR will be visible to observers in the US and Europe in the west during evening twilight.

Comet LINEAR was hidden in the Sun's glare when at its brightest in mid-May. In late May and June it will show itself just above the west-southwest horizon at dusk, fading all the while.

Meanwhile, by late May Comet NEAT will be high in the dark evening sky evening as it fades. It will remain ideally placed for viewing high in the northwest after dark through June (and July) as it dwindles away into the distance, eventually becoming visible only in telescopes.

So early in June midnorthern observers can see both comets at once — NEAT high in the western evening sky at about 4th magnitude, LINEAR emerging low in the west-southwest a little past its prime.

During June both comets should fade to below naked-eye visibility. NEAT will become lost to Southern Hemisphere observers in June; conversely, it will turn circumpolar for those in north temperate latitudes. As LINEAR fades, by contrast, it will move back into the glare of the Sun for northerners, but from the Southern Hemisphere it should remain a telescopic sight through July and August, glowing dimly at perhaps 11th magnitude by the end of that period.

Where to Look for Comet NEAT

Use our interactive sky chart to follow Comet NEAT as it moves through the skies of the
Southern
and
Northern
Hemisphere during May 2004. The southern chart shows the sky for 8:00 p.m. starting on May 20th at 35° south latitude; the northern chart is set to 10:00 p.m. starting on May 17th at 40° north. To adjust the date and time, highlight the month, day, hour, or minute and click the "+" or "-" button. To alter your viewing location, press the "Change" button on the location bar.

Where to Look for Comet LINEAR

You can also use our interactive sky chart to follow Comet LINEAR as it moves through the sunset skies of the
Southern
and
Northern
Hemisphere during May and June 2004. The southern chart shows the sky for 7:00 p.m. starting on May 18th at 35° south latitude; the northern chart is set to 10:05 p.m. starting on May 29th at 40° north.

Remember, to adjust the chart's date and time, highlight the month, day, hour, or minute and click the "+" or "-" button. To alter your viewing location, press the "Change" button on the location bar. 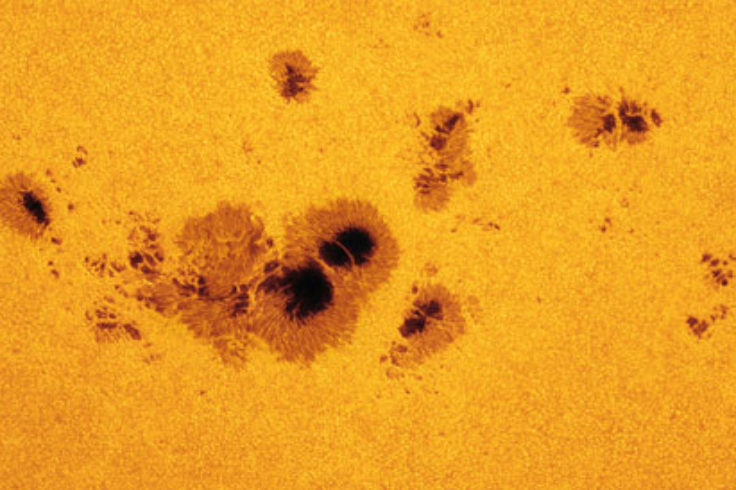 In Search of the First Star