This article gives directions for finding Uranus and Neptune in 2011. If you've never seen these planets before, you might want to read our general instructions first. 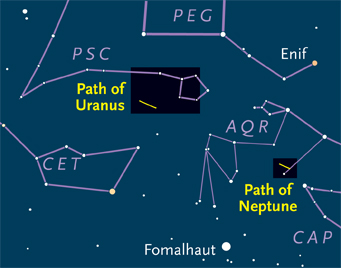 Uranus and Neptune spend 2011 in Pisces and Aquarius, respectively. Click on the chart above for a full-page, printable PDF.

Uranus and Neptune spend almost all of 2011 in Pisces and Aquarius, respectively. Uranus is near the celestial equator, and Neptune is considerably farther south — so neither gets very high in the sky for people at mid-northern latitudes. So it's important to make the best of the relatively short window of opportunity for viewing them.

Neptune reaches opposition to the Sun on August 24th, and Uranus on September 29th. These are the dates when the planets rise around sunset, set around sunrise, and reach their highest in the sky in the middle of the night. Neptune is reasonably well placed in the evening sky from August to mid-November, and Uranus from September through December. They can be observed several months earlier if you're willing to get up before dawn.

This is a banner year for Neptune, because on July 12, 2011, it will have completed a full orbit around the Sun since its discovery on the night of September 23-24, 1846. But due to the difference in Earth's position in July versus September, Neptune will appear against a different star background on that date.

Neptune's discovery position happens to lie very close to the point where it's stationary against the star background this year, on November 11th. That means that Neptune will be within 10' of its discovery position from mid-October to early December, coming within a fraction of an arcminute on October 27th and November 22nd.

As described in the July 2011 issue of Sky & Telescope, Neptune was discovered based on a prediction by Urbain Jean Joseph Le Verrier, which was very close to a similar prediction by John Couch Adams. Both predictions, as well as the actual discovery location, are shown on our detailed chart.