This article gives directions for finding Uranus and Neptune from June 2013 through February 2014. If you've never seen these planets before, you might want to read our general instructions first. 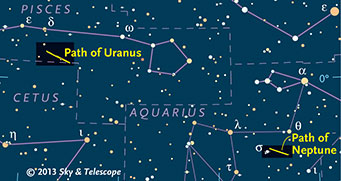 Neptune spends all of 2013 in Aquarius, and Uranus spends almost all of the year in Pisces. Click above to download a full-page, printable finder chart for both planets.

Neptune and Uranus are in Aquarius and Pisces, respectively, throughout this period, except that Uranus dips just over the border into Cetus for a few days in December 2013. Uranus is now just north of the celestial equator, and Neptune is considerably farther south — so neither gets very high in the sky for people at mid-northern latitudes. So it's important to make the best of the relatively short window of opportunity for viewing them.

Both planets become visible in bright twilight sometime in May 2013. Neptune rises first, but because it's so much fainter, it won't actually be visible much earlier. Sometime in June or July, both planets become high enough for decent telescopic viewing in the predawn sky.

Neptune reaches opposition to the Sun on August 27th, and Uranus on October 3rd. These are the dates when the planets rise around sunset, set around sunrise, and reach their highest in the sky in the middle of the night. Neptune is reasonably well placed in the evening sky from August through November, and Uranus from September through January 2013. They're detectable after that, but too low for high-power telescopic observing.