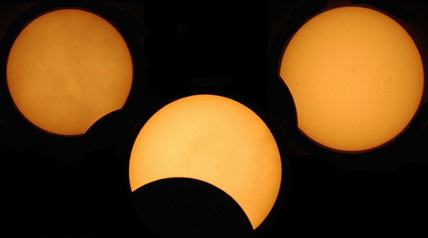 'I was very lucky to have a hole in the clouds to catch the entire partial eclipse' writes Franco Scapin from Switzerland. He used a Nikon D70 digital camera on an 8-inch Celestron Schmidt-Cass telescope at f/5. Click image for larger view.

Millions of people in Europe, Africa, and Asia cheered, whooped, prayed, and otherwise celebrated a partial eclipse of the Sun today, while thousands who flocked to the path of totality beheld the far greater spectacle of the solar corona springing into view in unnatural midday twilight. "Fine eclipse under an almost perfectly clear sky," reports Sky & Telescope books editor Paul Deans from Side, Turkey, where 200 travelers on a Sky & Telescope-sponsored tour watched totality from the Sunrise Queen resort. "The corona was not too extensive; we may have had some high-level haze — probably 2 to 3 solar diameters of extended corona. There were beautiful though small pink prominences visible to the naked eye. We had a fine sight of the Moon's shadow lifting off and away at third contact."

"The weather was perfect," writes Sky & Telescope executive editor J. Kelly Beatty from about 50 miles south of the oasis of Jalu in east-central Libya. "Our 146-member TravelQuest/S&T group was joined by about 2,000 other eclipse-chasers from around the world. The temperature drop during totality was quite significant. There was also amazing brush detail in the corona — it really took my breath away. Shadow bands were prolonged and obvious, even on the flat sand. 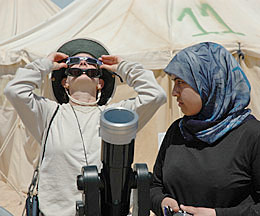 Watching from camp in the Libyan desert.

"We had a visit from one of [Libyan president Moammar] Khadafi's sons, who serves as the minister of tourism. Muslims lined up before second contact and prayed throughout totality — with their eyes to the ground! They never got to see the corona. I'm told by the imam who led the prayer that the practice of praying during eclipses goes back to the Prophet (Muhammad) himself." 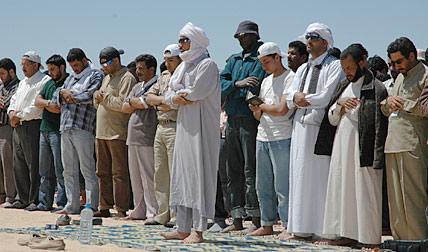 Also at the site was S&T senior editor Robert Naeye. "The eclipse was glorious! No words can really describe it, and photos don't do it justice. The shadow bands were the biggest surprise. 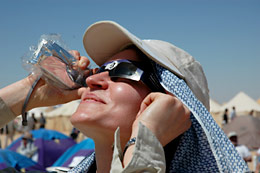 "It's great to have people from all over the world come to this remote place surrounded by sand to share a common experience," Naeye continues. "Anything that helps humanity shed some of its tribal mentality is a very good thing, and I wish the spirit of friendship that exists here amongst many different peoples can spread throughout the world. The Libyans have been incredibly gracious hosts, and have gone to great lengths to make sure their foreign guests, including Americans, have an enjoyable experience."

Jay Pasachoff led a group of students from Williams College in Massachusetts to do a number of experiments on the Greek island of Kastellorizo just off the Turkish coast. During three minutes of totality, the team took special high-speed imagery designed to help elucidate what heats the Sun's corona — the halo of multi-million-degree gas that is normally hidden by Earth's blue sky. Their cameras took rapid-fire images at narrow wavelengths emitted by iron atoms in the corona that have been stripped of 13 and 9 electrons by the extreme temperatures. The group took many other images, including the one at the top of this page. This was Pasachoff's 42nd solar eclipse. 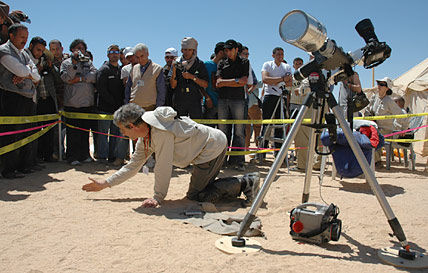 Landon Noll explains his search for 'vulcanoids' — asteroids orbiting close to the Sun — to a crowd at the Libyan site.

Among the many others on Kastellorizo was Anthony Ayiomamitis. "At the risk of being trite," he writes, "the exhilaration one experiences watching a total solar eclipse is beyond description. Well over 3,000 visitors to the island, fifteen times the permanent population, observed and marvelled at the brilliant show put on by our two most visible and dominant celestial neighbours.

"The three minutes of totality yielded a breathtaking view of the ethereal corona, stunning prominences placed all over the solar limb, as well as a magical view of Baily's beads. Regrettably these three minutes seemed to pass in a matter of seconds, for the velvet blue sky very gradually returned to its normal self and our feathered friends started their chirping in anticipation of a 'new' sunrise." 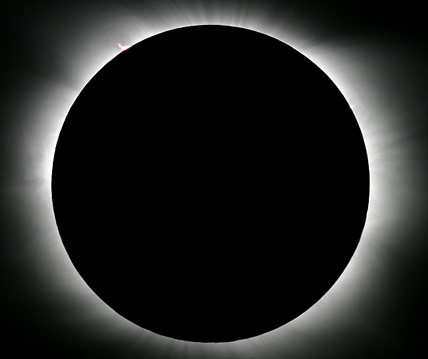 This short exposure captures the delicate inner corona and a couple of pink prominences glowing by hydrogen-alpha emission. 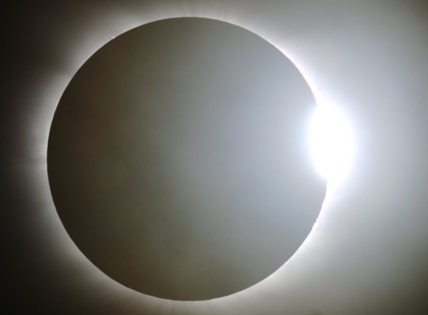 A closeup of the diamond ring bursting into view, as a thin bright rim of the Sun's photosphere re-emerges from behind the Moon.

With another tour group was S&T associate editor David Tytell. He writes: "As the Moon's shadow passed over the seaside city of Salum in the northwest corner of Egypt, thousands of people stood in awe of what many eclipse veterans referred to as 'one of the most beautiful eclipses' they had ever seen. Among the watchers was Egyptian president Hosni Mubarak, who witnessed the event from a VIP tent just yards from the nomadic amateur astronomers. 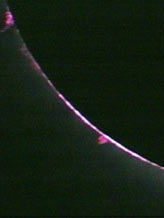 A shot of the Sun's chromosphere, so named because of its vivid color when seen at a solar eclipse. The chromosphere is a relatively cool layer just above the Sun's white-light-emitting photosphere. It glows with the distinctive red light of hydrogen-alpha emission.

"I was struck by this eclipse's symmetry, its simple elegance, and its abundant phenomena. The coronal streamers made a butterfly pattern, at least two prominences were visible to the naked eye, prolonged diamond rings wowed observers at both second and third contacts, and Baily's beads were seen by many. The 360-degree horizon sported the deep orange-yellow colors of sunset, Venus blazed in the sky above (visible naked-eye more than 15 minutes before totality), and even tiny Mercury was easy to spot — for those who could take their eyes off the beautiful corona for even a second."

Here are video clips from NASA and an eclipse gallery from Science@NASA. See also the local-color stories on CNN and the Discovery Channel.

And, as usual, some people just didn't get it. In parts of Turkey, residents set up tents outdoors for fear that the eclipse would cause an earthquake; a quake came six days after an eclipse in 1999. In India, where the eclipse was partial at sunset, the Hindustan Times warned that food cooked beforehand would become impure and should be thrown out, and that persons holding a knife or ax during the eclipse risked cutting themselves. Pregnant women were advised by one newspaper in India that if they went outside during the eclipse, their babies might be born blind!

Watching from camp in the Libyan desert.