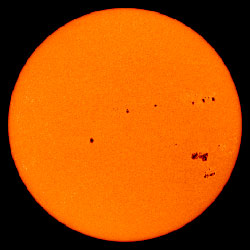 The large pair of spots (active region 10410) situated near the lower-right limb of the Sun in this image show on July 22, 2003, grew from a tiny spot in less than a week.

Sunspots are dark blemishes on the Sun's visible surface (photosphere). They form where the solar magnetic field traps ionized gas and allows it to cool. Whereas the photosphere's average temperature is 5,700° Kelvin, in the dark center (umbra) of a sunspot, where the field is strongest, it's about 2,000°K cooler. If you could view a sunspot by itself, it would appear blazingly bright. But in contrast with its even brighter surroundings, it appears dark. The umbra of a large spot is typically surrounded by a lighter penumbra, where the magnetic field isn't quite as strong.

The Sun turns on its axis roughly once a month, so a spot takes about two weeks to appear from behind the eastern limb, travel across the disk, and depart around the western limb. Sunspots also evolve, changing their size, shape, and structure as they sweep across our star's face. Most spots are associated with groups that can change dramatically in a matter of hours or days.

The active region known as 10410 gave a vivid demonstration in mid-July 2003. In less than a week this spot grew from a pair of tiny black blemishes on the solar disk to a large complex sunspot group 10 times the diameter of Earth. But the lifetime of sunspots is usually measured in days, not weeks, and even as 10410 disappeared around the solar limb it was beginning to disintegrate.

Sketching or photographing sunspots on a daily basis can be a rewarding way to follow their evolution. But remember, never look at the Sun without proper eye protection. There are a variety of ways to safely observe the Sun, many of which can be found in the solar observing section of our Web site. If it's cloudy, you can always do your solar observing indoors — catch the latest images of the Sun on the SOHO website.