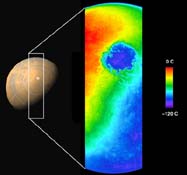 After nearly a week
in orbit around the red planet, NASA's 2001
Mars Odyssey spacecraft has returned its first images. Yesterday,
the Jet Propulsion Laboratory (JPL) released the above view taken on
October 30th using the orbiter's thermal emission imaging system (THEMIS).
The inaugural frames spanned 6,500 kilometers over Mars's south pole.
The most noticeable feature is the 900-km-wide polar cap of frozen carbon
dioxide.

Odyssey is currently in an elongated orbit around Mars.
For the next three months, flight controllers will gradually circularize
the orbit by flying the spacecraft through the planet's thin upper atmosphere,
where frictional drag will slow the probe. THEMIS should have a resolution
of 100 meters once Odyssey settles into its final orbit (only 400 kilometers
above the surface) at the end of January.