The International Astronomical Union has given its official approval for 86 additional star names.

Ever since its inception in 1919, the International Astronomical Union (IAU) has been responsible for the names of solar-system objects, as well as features on those objects. And in a very important series of resolutions from 1922 to 1930, it approved standard spellings, abbreviations, and definitions for the 88 official constellations. But the IAU stayed out of the star-naming game until very recently.

It was the discovery of exoplanets that broke down the barrier. Within our solar system, major planets have familiar names like Earth and Jupiter, and minor planets have both numbers and names (e.g. 1 Ceres, 4 Vesta, or 99942 Apophis), so it seemed as though it would be fun to do the same for a few planets in stellar systems besides our own. In 2015, the IAU approved names for 31 exoplanets.

But it would hardly do for an exoplanet with a cozy name like Meztli to orbit a star with no better designation than HD 104985. So at the same time that it approved those exoplanet names, the IAU approved 19 names for the stars around which those exoplanets orbit. That included five traditional names, notably Pollux and Fomalhaut, as well as 14 newly invented names. (Actually, many of those names are quite old, but they had never before been associated with stars, just as Ceres wasn't associated with astronomy before it was assigned to the first-discovered asteroid.)

But that decision created new problems. It seemed very strange for the IAU to approve 14 fabricated star names and say nothing at all about star names like Sirius that have been used by professional and amateur astronomers for centuries. And it's hard to justify making the name of Pollux official while denying the same status to its twin star Castor. So in 2016, the IAU's Working Group on Star Names (WGSN) gave official status to 208 additional star names. That included 207 traditional names for stars readily visible to the unaided eye plus one star discovered and named in the 20th century: Proxima Centauri, our Sun's closest known neighbor in space.

Now the Working Group on Star Names has proved that it's still hard at work: you can see the newly approved 86 star names here. About half of them, like the earlier set, come from the Western tradition but were for various reasons too problematic to approve in 2016. (Common problems include stars with multiple names and names associated with multiple stars.) But there are lots of prominent stars that have no names in the Western tradition, so to fill in the blanks, the WGSN drew from other cultures, namely Australian Aboriginal, Chinese, Coptic, Hindu, Mayan, Polynesian, and South African.

In addition, the WGSN approved another name that was invented in the 20th century for a faint, nearby star, namely Barnard's Star. Of all the stars that sound as though they're some astronomer's personal property (for instance, Tabby's Star), Barnard's Star is almost certainly the most prominent. It’s famed in history, science, and science fiction as the fourth closest star to the Sun (after the three components of the Alpha Centauri system) and the star with the highest known proper motion.

It will be interesting to see where the WGSN goes from here. There are still plenty of prominent stars with no IAU-approved name, the brightest being 1.7-magnitude Gamma Velorum. It does have a couple of obvious candidate names, including Regor, one of the three star names fabricated by NASA from the names of the astronauts who died in the horrific Apollo 1 fire. Another one of those is Navi, for Gamma Cassiopeiae, the brightest star north of the celestial equator with no current IAU-approved name.

Personally, I think the WGSN should approve Regor and Navi. The IAU has already approved two similar names, Sualocin and Rotanev, which originated in 1814 in the Second Palermo Star Catalog and have since passed into common usage. They are derived by reading backward the Latinized name (Nicolaus Venator) of Niccolò Cacciatore, coauthor of the catalog. It seems to me that the Apollo 1 astronauts are far more deserving of commemoration than Niccolò Cacciatore.

I could also imagine the IAU requesting public suggestions for prominent stars that don't have a name in any well-documented culture, just as it did for exoplanets and exoplanet stars. I have mixed feelings about those original fabricated exoplanet-star names, but now that the IAU has started, I can't see turning back. It would be really nice for all stars to have names at least down to magnitude 2.50. What do you think?

I'm all on board with having all stars to magnitude 2.5 named. But why stop there? There are enough stars to let everyone on Earth name one if they wanted. I'd love to have my own "official" magnitude 10.5 star. I think the IAU should start an official star registry for individuals to name stars.

I've spent a lot of time over the years "collecting" all the star names I could find and have notebooks full of them. I don't discredit any source because I like having as many options as possible. Gamma Velorum is commonly called "Regor", most importantly in the "Short Guide to Modern Star Names and their Derivations" (SGMSN). But I've also found it as "Al Suhail" in the "World Almanac and Book of Facts - 2005" which is probably from "Al Suhail al Muhlif" from the epic book "Star Names - Their Lore and Meaning" (SNLM). But SNLM also calls it the "Spectral Gem." Gamma Cassiopeiae could be "Navi" (SGMSN) or "Tsih" (SNLM). I definately favor "Regor" and "Navi."

The other named astronaut star, "Dnoces" for Iota Ursae Majoris, is unfortunately but necessarily overruled by the name "Talitha". However, I prefer calling it "Talitha Borealis" along with "Talitha Australis" for Kappa, because they are one of the three star pairs making up the "Three Leaps of the Gazelle" along with "Tania Borealis / Australis" (Lambda and Mu) and "Alula Borealis / Australis" (Nu and Xi). Kappa, however, has its own name, "Al Kaprah", according to "The Photographic Atlas of the Stars."

I ran across a source that called every "nearest star" in each constellation "Proxima" followed by the constellation name, for example "Proxima Canis Majoris" was Sirius. This automatically gives us 88 names, mostly to very dim but important stars. Lalande 21185 becomes "Proxima Ursae Majoris" and and Ross 248 becomes "Proxima Andromedae". Yet, I've never liked using these as proper names because I expect that some of the "names" will have to migrate when we get more data from Gaia. And some of the nearest stars have catalogue designations that have "become" names to me: Wolf 359, EZ Aquarius, Epsilon Eridani, etc.

If more than one name is available for a star that has multiple components, separate names could be given to each component. A great example is "Sirius" (for Sirius A) and "The Pup" (for Sirius B). Epsilon Bootis A could be "Izar" while Epsilon Bootis B could be "Pulcherrima" (or vice-versa). But I also have no problem with stars sharing a name with a letter or number appended to them. For example, the stars around Algol are named "Gorgonea Secunda" (Pi), "Gorgonea Tertia" (Rho), and "Gorgonea Quarta" (Omega), with Algol itself being "Gorgonea Prima".

In my notebooks I also keep pages for stars that I feel "should" have names because of their importance, in the hopes that I'll run across some interesting names that I could apply to them. I've applied names to a few of them because I think the name choice is fairly obvious. For example, we have Acrux, Becrux, and Gacrux in the constellation Crux, so I think the remaining unnamed star needs to be called "Decrux". Likewise, with Alpha Piscis Austrini being "Atria", I think Beta should be "Betria" and Gamma should be "Gatria".

As someone with such an interest in star names and their histories, I have to admit that I've also always wanted to name Delta Cygni "Haon" because it's my son's name backwards. Likewise, my name backwards it "Yeroc", which would be a perfectly good name for Gamma Persei.

Some of my favorite named stars include "Torcularis Septentrionalis" for Omicron Piscium and "Shurnarkabtishashutu" for Zeta Tauri. I also enjoy the variable "Goldilocks Star" superimposed with the Dumbbell Nebula and "Sidus Ludovicianum" or "Ludwig's Star" (HD 116798) that forms an obvious triangle with Mizar and Alcor.

Interesting article Tony and an even more interesting reply Corey!

There used to be this company that allowed you to register a star name after your name choice. I wonder if it still exists and if it was bogus or not.

The First-Ever Meteorite from Mercury? 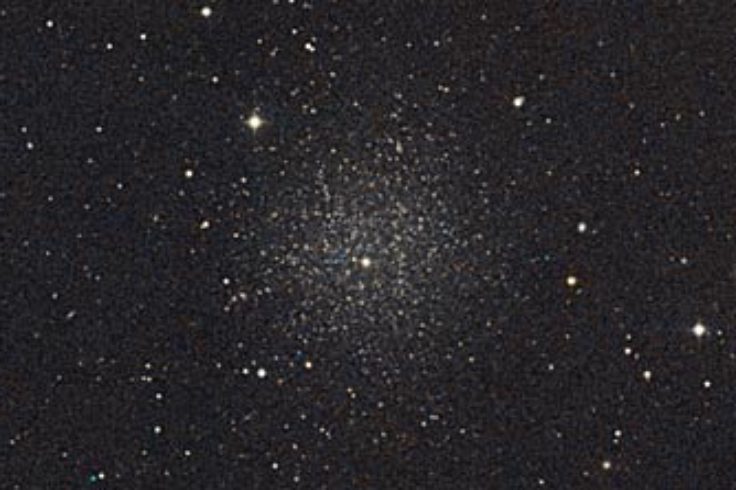