Where's the planet that should be to blame for this star's carved-out disk? 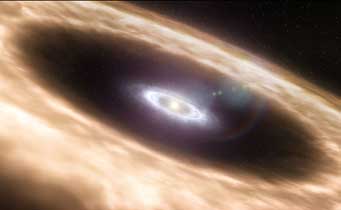 This illustration shows a young star with its dusty disk, in which a gap has been carved out. Astronomers think such gaps signal the formation of planets.

How do planets form? This deceptively simple question has sparked a new field in astronomy over the last two decades. Astronomers have used telescopes all over the world (and in orbit!) to study all stages of planet formation, from disks of material around infant stars to the scattered debris and planetesimals in systems such as Fomalhaut’s. The goal of all these studies is the development of a coherent scenario that explains the behavior and evolution of planet-forming disks around young stars and links them to the exoplanets observed around older stars (such as those glimpsed by Kepler).

New results on a particularly exciting system, V1247 Orionis, may shed light on an important, seldom-observed stage of planet formation. Stefan Kraus (Harvard-Smithsonian Center for Astrophysics, University of Michigan, and University of Exeter, UK) and his colleagues observed in visible to far-infrared wavelengths (about 400 nm to 100 microns) the star V1247 Orionis, a young star hiding in Orion’s Belt that is part of the extensive star-forming association there. V1247 Ori has a mass about twice that of the Sun but is very young, with an age from 5 to 10 million years. The star was known to harbor a disk, but Kraus and his team used a slew of ground-based instruments in the Northern and Southern Hemispheres to better understand the disk’s properties.

Disks form around young stars with the material left over from star formation. The most widely accepted planet-formation scenario predicts that it takes a few million years to build planets from these disks, with dust grains gradually clumping together to form larger objects. Once these planetesimals gain enough mass, they begin to gravitationally interact and disrupt the disk they formed from, creating gaps in an otherwise smooth pancake.

In the last few years, observations of very young stars with disks have shown tantalizing evidence of just this scenario. Most notably, observations of the star LkCa15 revealed a planetary companion carving out a gap in the star's disk.

Kraus and his team deduced the presence of a gap spanning from about 0.2 to 46 astronomical units in the disk of V1247 Ori, slightly larger than the distance between the Sun and the Kuiper Belt’s inner edge and about the same size as the gap around LkCa 15. Yet when they used the Keck 10-meter telescope to look in the gap, they couldn’t find any protoplanets. Instead, they detected a complex, perhaps clumpy distribution of diffuse dust. Because the astronomers observed at a range of infrared wavelengths (the gap is most readily visible in the 1.5 to 13 micron range), they were able to probe a larger variety of dust temperatures than usual, which might explain the novel results.

V1247 Ori is the first star of the team’s observing campaign, and it’s possible that the star is experiencing a normal, early stage of disk clearing. But astronomers expect to find a planet if there’s a gap, and that gap "should" be clear. Perhaps the dusty haze is a short-lived transition period between gap and planetesimal formation.

An unexpected result from this analysis concerns the diffuse material’s composition. Previous observations of other holey disks have pointed to a silicate-based dust around these stars, like pulverized rock. However, in the case of V1247 Ori, the dust is probably carbon-based. Carbon is the building block of organic material, and is also thought to be prevalent in some exoplanets (such as 55 Cancri e). One other system, Beta Pictoris, shows signs of carbon-rich debris.

As astronomers gather more information on the planet-formation process, new questions and details continue to emerge. The type of investigation led by Kraus and his collaborators paves the way for studies with new telescopes, such as JWST and ALMA. These telescopes will be capable of directly observing the locations of planet formation, and the future looks bright for unraveling the mysteries of this process.

I cant help wondering, could there have been enough time already in V1247 Orionis for two rather massive planets to have formed and then been ejected? My idea was that perhaps due to thicker and or denser dust in what has become the gap area of the disk planetesimals may have formed here very quickly and then they coalesced into two rather massive but like sized protoplanets. Massive collisions leave them both with eccentric obits which help them somewhat clear out the large gap. The orbits of these two proposed planets have increasingly close conjunctions, but what saves them from a collision themselves is that prior collisions have left them with obits angled enough to the average plain of this systems ecliptic, so that when the last close encounter occurs one planet is above the other. The near miss causes the mutual gravitational attraction to far surpass the pull of their star, and the two planets eject each other from the system, being gravitationally chucked away, one flying out from the bottom side of the disk and the other from the top. They sail out into interstellar space on hyperbolic trajectories, becoming rouge planets. Could something like this explain the huge protoplanet-less gap?

They expect one planet to form a gap 47 AU wide?

They expect one planet to form a gap 47 AU wide?

How large are other observed gaps then, if there are any at all?

That is an awfully wide gap for one or even two big planets to have cleared - which in any case are apparently not there, or at least are no longer there. While the authors of the paper present a fairly compelling case (based on observations) for a mechanism they propose for that gap - basically entirely attributable to planetesimal growth in that particular region - it seems that other dynamical forces can have contributed to produce this situation as well, including a 'burp' from the host star in the past that might have cleared out much of the gas in the region out to the current inner perimeter of the outer disk. As that outflowing density wave was pushed outward to the extremity permitted by the energy given to its initial impulse, it can have encouraged dust along the way to clump up into sizeable bodies which this team subsequently identifies as the entire reason for the gap.

Rod, your concluding point is one that nearly everyone interested in astronomy should be able to agree with. To your list of planetary system variables orbital eccentricities ranging from zero to .97 (see HD 20782 b) could be added. Star____, your double posting for which you begged our pardon can be easily forgiven since this happens at times to many if not all frequent posters. (I see now that the redundancy has been removed along with your request for pardon. I wonder why Robert McCabe’s duplicate post wasn’t fixed too?) But, if you are really conserned about not giving offense however you might kindly consider altering your username, which could make it easier for some to engage you in these discussions. The points you make are worthy of consideration though. Yes, a gap nearly 47 AU wide is very large, and if one planet ranged over that entire distance the eccentricity of its orbit would have been .9915, making Robert’s point as well. Your point that a blast from the star could have played a roll could be valid too, except, how would you then account for the remaining inner disk existing inside .2 AU where the force from any blast would have been the greatest? As for my suggestion that two planets with highly eccentric orbits could have kicked each other out of this system already, your stating “that is an awfully wide gap for one or even two big planets to have cleared” prompted me to ask, What is the minimum orbital eccentricities that two planets could have had that would have covered this distance? Since eccentricity = (apoapsis - periapsis) / (apoapsis + periapsis) it can be shown that two planets sharing eccentricities of around .8775 and a convergence at about 3.066 AU could have done the deed. I know this must seem highly unlikely, but I still think something like this could have accounted for this missing planets mystery at V1247 Ori.

Bruce et al. There are other reports too of dust disks with gaps. What I don't know is the total number documented and if any have confirmed exoplanets orbiting in the gaps. LKCA 15 b may be an example where an exoplanet and gap are together. Many others may not show this, that would not surprise me given my previous list posted here. Ref - Transitional disks and their origins: an infrared spectroscopic survey of Orion A, March 2013, http://adsabs.harvard.edu/abs/2013arXiv1303.6313K, Resolving planet-cleared gaps in transitional/pre-transitional disks with NIR+MIR+sub-mm interferometry, February 2011, http://adsabs.harvard.edu/abs/2011noao.prop..191K.