It's hard to believe that NASA's Cassini orbiter has been on the job at Saturn for more than seven years. Since its arrival on July 1, 2004, the spacecraft has circling the ringed giant more than 150 times and recast everything we know about the Saturnian system. In that time it's had scores of close encounters with the giant moon Titan and more than a dozen with the eruptive moon Enceladus. The complete flyby score card, past and future, is here.

Beyond the need to maximize Cassini's science return, Carolyn Porco, who heads the mission's team of imaging specialists, has shown a keen eye for capturing the beauty and awesomeness of this incredible planetary system. "Since the first days of this mission, back in 1991," she explains, "I had this vision that the imaging team would be serving as the 'nature photographers' of the Saturn system — visually recording, whenever possible, all the phenomena there are to see around Saturn."

One such view made the cut for Time's 2009 "Year in Pictures". Another shows the planet in a dramatic silhouette (a solar eclipse, actually) unobtainable from Earth.

Every time Cassini's cameras take snapshots while crossing Saturn's ring plane, there's an opportunity to capture one or more moons in the field of view. 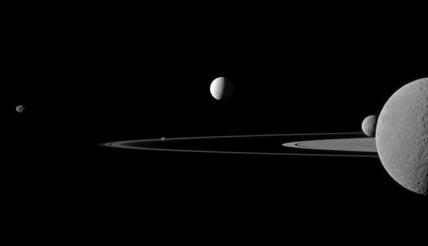 Captured on July 29, 2011, this Cassini image shows the Saturnian moons (from left): Janus, Pandora, Enceladus, Mimas, and Rhea. Also visible are the F and A rings of Saturn. Click on the image for a larger view.

That's just what occurred last July 29th, when the spacecraft looked toward the northern, sunlit side of the rings from just above the ring plane. For a frame of reference, half of the icy moon Rhea looms in the foreground at far right, 1.1 million miles (1.8 million km) from the camera. Rhea is 950 miles (1,528 km) across, roughly half the size of Earth's Moon. Extending leftward from its limb are the smaller moon Mimas (246 miles or 396 km across); Saturn's A ring — note the dark, 200-mile wide Encke gap near its tip; and, farther left, the detached strands of the F ring.

The image was taken in visible light (green filter). The original's image scale is 4 miles (7 km) per pixel — a little coarse for detailed science work, but plenty good enough to reveal this dramatic group portrait. As Porco notes, "Some of these multiple-body photos are useful for refining orbits of the moons — and especially for working out how moons perturb each other."

That sounds like a very impressive picture. Where is it?

Now it's there, thank you. Definitely worth the wait. Beautiful! 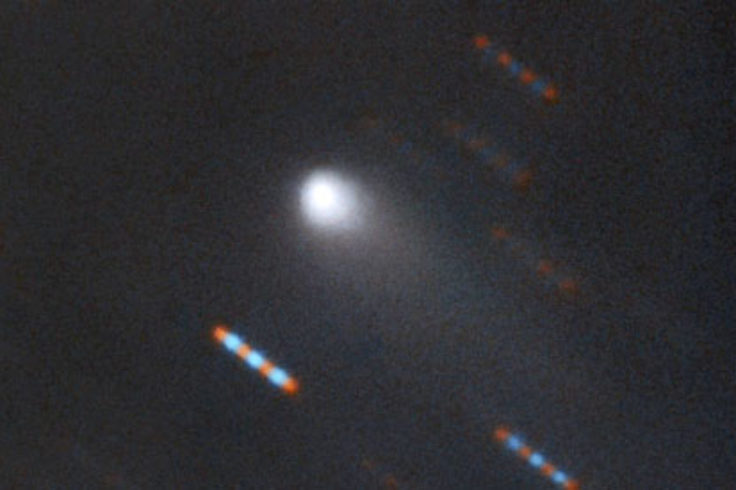 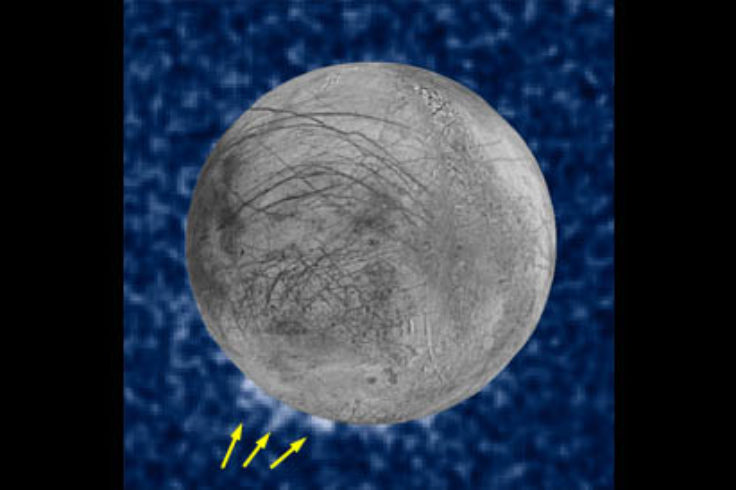 Hints of Geysers Erupting from Europa