Nestled in the Chilean Andes at altitude of 7,900 feet (2,400 m), the European Southern Observatory's 3.6-m reflector at La Silla is neither the highest nor the largest telescope in the region. Far from it. However, coupled with the incredible HARPS spectrograph, this telescope is cranking out discoveries of extrasolar planets faster than any other observatory on Earth. 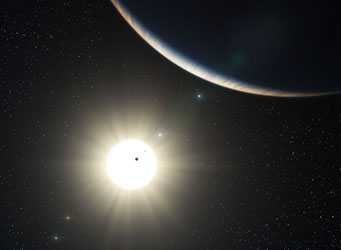 An artist's impression of the many worlds orbiting the Sunlike star HD 10180.

Today, at a gathering of planet-hunting astronomers in France, Christophe Lovis (Geneva Observatory) announced that his team has identified a solar system packed with planets — five for sure, and probably seven — using the La Silla facility. It's the most populous exoplanet system known.

The central star is HD 10180, a type G dwarf situated 137 light-years away in the southern constellation Hydrus. It's one of 400 nearby Sunlike stars that astronomers have been monitoring from La Silla for years. HARPS can't see these worlds directly; instead it detects minuscule Doppler shifts in the stars' light, caused by back-and-forth wobbles in their motion that, over time, reveal the presence of planets circling around them. In the case of HD 10180, the telescope amassed 190 nights of observations over six years.

You could make a case that spotting alien planets has gotten a little ho-hum — after all, the total count (including those orbiting the Sun) now tops 500, and 15 systems involve at least three planets.

But HD 10180 definitely raises the bar. Its five sure-things, dubbed C, D, E, F, and G, have Neptune-class masses 13 to 25 times that of Earth. But all five are quite close to the star, in orbits that range from 0.06 to 1.4 astronomical units (5½ to 130 million miles out). So much mass packed so close together is bound to incite gravitational tussles among them, and future observations will follow the long-term evolution of the system. 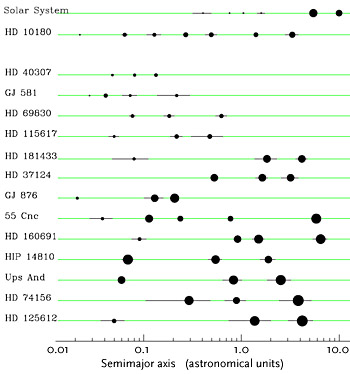 A comparison of our solar system with that of HD 10180 and other stars encircled by at least three planets. Black lines indicate the range of distance due to eccentric orbits.

But wait — there's more! Lovis and his team are fairly certain there's a sixth planet, H, with at least 65 Earth masses (making it Saturn-ish) and orbiting 3.4 a.u. from the star. There's also strong evidence for a seventh sibling, B, zipping just 0.02 a.u (2 million miles) from the star. Although not yet confirmed, this innermost planet might be very close to Earth in mass. It causes a wobble in HD 10180 only about 2 miles (3 km) per hour — "slower than walking speed," notes team member Damien Ségransan — and is thus very hard to measure.

For all the details, read the team's article in the current issue of Astronomy & Astrophysics. At upper right is Figure 13, a concise comparison of solar systems with three or more planets (one is missing, however: the four-member set circling pulsar PSR 1257+12).

Now that we know of a system as crowded with planets as our own, isn't it about time we starting finding some that resemble Earth? That bar-raising exoplanet discovery may not be long in coming — NASA's Kepler spacecraft is looking for them right now.

I am still asking the same question that Dr. Enrico Fermi asked in the 1950's: Where are all these civilizations you speak of?

There are at least several reasons to be quiet in Space. For example our technological weakness, human violent nature, alien logic out there, human as a space lab experinment, etc. Or simply - Galactic Dominium fee denominated in latinum is much too high for us.

Looking at the creschent moon a week ago, I saw a black hole and not far another hole white and like a light flickering inside. I have asked this question before, but no answer yet, thanks if you can tell me about it. And again, I am surprised to see this big planet, I think, late after midnight, above my head so very bright and near. I live in Lebanon, thanks

Juliette, the bright planet you saw is probably Jupiter
The flickering light was perhaps a point source meteor, this means a regular meteor which was coming straight at you.
The black hole may have been a small cloud projected against the Moon.