For any of you contemplating a career in planetary science, let me take a cue from the classic 1967 movie The Graduate and offer one single word of advice: "Modeling."

Trying to figure out how planets form and what happens after they do is arguably one of the hottest research areas in astronomy. With the count of known extrasolar planets now topping 300, a tenth of those being multi-planet systems, it's becoming clear that there's a whole smorgasbord of planetary combinations out there — few of which look anything like ours — and we don't know why.

One problem is that dynamicists can't yet harness enough computing horsepower to tackle all the processes that take place in a planet-forming disk: how long the disk's gas hangs around, how and where planet embryos form, and what kind of collisional chaos ensues. To date, most planet-building computations have sidestepped all the messy intricacies of how gas and solid bodies interact within the disk. Theorists simply hit "go" once the gas has dissipated. 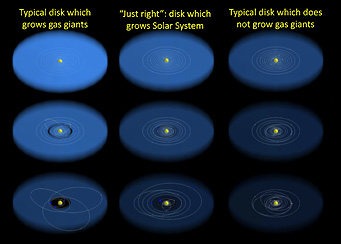 How do solar systems form? The model at left, which observations suggest may be typical, leads to violent interactions that produce eccentric and "hot" Jupiters. At right is a "barren" scenario, also typical, in which nothing bigger than Neptune grows. An in-between case, in the middle, has starting conditions that yield a mix of planets looking like our own solar system. Click on the image to see a larger version.

But recently a trio of researchers at Northwestern University in Illinois followed the birth of more than 100 hypothetical solar systems from beginning to end. Each simulation ran for 500 million years — long enough for the star-encircling disks to spawn and then for the young worlds to interact with the disk and duke it out until only a few remain.

Writing in August 8th's Science, Edward Thommes, Soko Matsumura, and Frederic Rasio determined that exoplanetary roulette depends on how much mass the disk has to work with, and whether the disk sticks around long enough for giant planets to form. At one extreme, wimpy disks that dissipate quickly will produce no gas-giant planets at all. But massive, longer-lasting disks end up with multiple giants that jostle each other gravitationally.

The new simulations even yield the "hot Jupiters" that observers have unexpectedly discovered — giant planets that migrated inward but stopped just short of being swallowed by their host stars either when they reached the disk's inner edge or the disk itself dissipated.

The real take-home message is that our particular planetary mix — with several little rocky ones and several more big gassy ones, all coexisting peacefully in nearly circular orbits — is the exception, not the rule.

"The solar system had to be born under just the right conditions to become this quiet place we see," notes Rasio in a Northwestern press release. "The vast majority of other planetary systems didn't have these special properties at birth and became something very different."

I would think that the basic nature of the parent star would have more than a little to do with it. How far out has the solar wind cleared everything? How far out will the heat of the parent star prevent water from being ice? How far out will the heat of the parent star keep ammonia and methane from freezing? At what point will the volume of the disk be so thin as to preclude really large planets from forming? I would think that our rocky inner planets happened because a strong solar wind blew most everything else away--then past that point we have our gas giants--and finally out where methane freezes, but the total concentration of matter in the disc is waning we have snowball planets. Snowball planets are just what happens to happen when temperature is low and concentration is small--rocky planets happen when the solar wind blows everything else away, and giant planets happen in the middle. All are equally different from one another--and are just what happens at that particular temperature and concentration. This business of saying snowball planets aren't planets is an excellent illustration of researchers seeking Warhol's 15 minutes of fame. Normally several centers of condensation will form, and they will migrate in, accruing their matter until they reach the aria cleared by the next closer protoplanet. if there is lots of stuff, and probably a weak solar wind a giant might clear to quite close to the parent.
Stan Kerns

I've done some modeling! There are downloadable programs (I use GravitySimulator) that model gravitational interactions. But that particular program certainly doesn't include gas. It is, however, useful for all kinds of things. And it's fun to do.

Theorizing that Neptune's moon Triton formed as a binary at the Sun/Neptune L4 or L5 point, I flew binaries past Neptune. Indeed, often one was captured and one was flung into a high orbit around the Sun. Unfortunately for me, Craig Agnor and Douglas Hamilton beat me to a scientific paper on the subject.

But I noticed that sometimes the binary would collide. So I think the lost moon of Triton is the strange object 2003 EL61. I suggest the name "Rhode" for it. She's Triton's sister and the name is open.

Not to throw any more monkey wrenches into the mix, but I wonder if Dark Matter works on smaller conglomerates such as developing planetary systems?

Not to throw any more monkey wrenches into the mix, but I wonder if Dark Matter works on smaller conglomerates such as developing planetary systems?