Every now and then someone tries to trip me up with that old trick question, "What's the closest star to Earth?"

"Hmm," I reply in mock contemplation. "Is it the Sun?"

This little exchange underscores how we've come to regard old Sol as a one-of-a-kind star. But now two astronomers think they've found the closest thing yet to the Sun's twin. It's not some long-lost, separated-at-birth companion, but rather a 9th-magnitude blip in the constellation Draco that's about 200 light-years away. 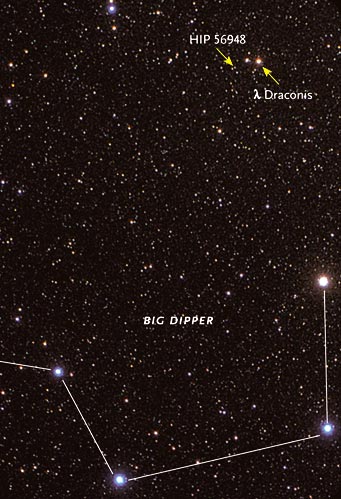 HIP 56948 is a nearly 9th-magnitude speck. If you were there, this is what our Sun would look like.

It's designated HIP 56948, and it's gotten a lot of attention recently from Peruvian astronomers Jorge Melendez (Australian National University) and Ivan Ramirez (University of Texas, Austin). They used the 2.7-meter telescope at McDonald Observatory to study the star, concluding that HIP 56948 is a dead ringer for our Sun not only in terms of its mass and temperature but also its composition.

A star so very like our own would seem to be a good candidate to look for planets like our own. Alas, Bill Cochran (also at UT Austin) has already found that HIP 56948 has no large, close-in planets comparable to Jupiter. Earth-size worlds may still exist there, but we don't yet have the technology to detect them.

The Goldilocks Enima is *extremely* specific about its testable predictions for where in the habitable zones we should and should-not look.