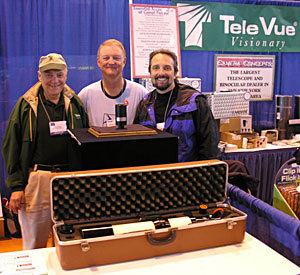 The 2007 Northeast Astronomy Forum in Suffern, New York, attracted thousands of enthusiasts, including (left to right) Tele Vue president Al Nagler, Springfield Telescope Makers president John Gallagher, and astronomer-author Steve O'Meara. Here they pose with a prototype 13-mm Nagler eyepiece from 1980 and the Tele Vue Genesis refractor through which O'Meara made the observations for his three Deep-Sky Companions books. This historic gear will be auctioned in July 2007 to benefit the annual Stellafane convention in Springfield, Vermont.

Two precious artifacts from recent astronomical history will be sold to the highest bidders on eBay in late July. One is a prototype of the 13-mm Nagler eyepiece, which transformed deep-sky observing in the 1980s. The other is the Tele Vue Genesis refractor that renowned observer Stephen James O'Meara used over the last decade while preparing the three books in his Deep-Sky Companions series. Proceeds from the sale will benefit Stellafane, the oldest and most revered star party in North America.

The impending auction was announced at the Northeast Astronomy Forum in Suffern, New York, by Tele Vue Optics founder and president Al Nagler, O'Meara, and John Gallagher, president of the Springfield (Vermont) Telescope Makers, the club that has hosted Stellafane on Breezy Hill every summer since the 1920s.

Nagler and O'Meara donated the items for auction to help defray the cost of Stellafane's recently completed Flanders Pavilion. This giant barnlike structure provides a spacious, dry venue for speakers and attendees at the convention, which sometimes goes by the tongue-in-cheek name "Stellarain" thanks to the fickle New England weather. While nobody can guarantee clear skies for observing, the Flanders Pavilion nevertheless guarantees that Stellafane's other activities — including lectures and telescope-making demonstrations — can proceed rain or shine.

Al Nagler introduced his namesake ocular, with its expansive 82° "spacewalk" field of view, in 1980. Backyard stargazers were immediately bowled over by the eyepiece's ability to produce pinpoint star images across such an unprecedentedly wide, distortion-free field. Three prototypes of the original 13-mm design were manufactured in Peekskill, New York, not far from Tele Vue's current headquarters in Chester, and it's one of these that will be sold at auction.

O'Meara's Genesis, a 101-mm (4-inch) f/5 forerunner of Tele Vue's current 101-mm apochromatic refractors, has spent most of its life on the Big Island of Hawaii, where its soon-to-be-former owner observes near his home on the flank of Kilauea volcano. The instrument is being offered for sale with its original case, 2-inch star diagonal (with 1¼-inch adapter), 22-mm Panoptic eyepiece, 7- and 4.8-mm Nagler eyepieces, 1.8x Barlow lens, and Tele Vue Quik-Point finder. O'Meara has autographed the telescope's tube.

To register for this year's convention on Breezy Hill, scheduled for August 9–12, and to stay informed about the upcoming auction, visit the Stellafane website.