Specially-designed reflectors, left on the lunar surface by Russian rovers and Apollo astronauts, are getting less efficient due to a coating of dust — and more so whenever there's a full Moon. 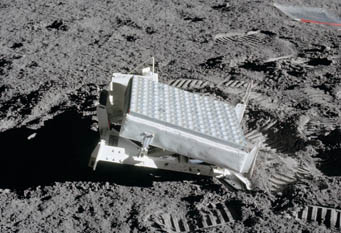 This bank of reflective prisms, left on the lunar surface by Apollo 14 astronauts, is used by astronomers to gauge the Moon's exact distance from Earth.

This is the time of year when my high-school students learn about how the oceans' incessant tides are gradually causing the Moon to move farther outward and Earth's rotation to slow very gradually.

As evidence of this energy transfer, I point to four decades of ranging data collected using special reflectors left on the lunar surface by Apollo astronauts and the Soviet Union's Lunokhod 1 and 2 rovers.

These "retroreflectors" are corner-cube prisms, that is, three mirrored surfaces that come together at right angles. (Think of how a room's walls and ceiling come together in a corner, and you'll get the picture.) They have a nifty geometric property: a beam of light striking them at any angle (within reason) will be bounced back in exactly the reverse direction. 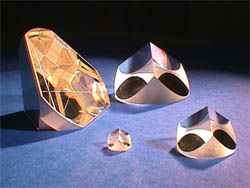 Corner-cube prisms have three perpendicular faces that cause a beam of light to be reflected in the same direction from which it arrived.

Astronomers back on Earth periodically fire lasers at these suitcase-size banks of reflectors to determine where the Moon is in its orbit and, specifically, precisely how far it is from Earth. Initially, the laser ranging was good to an accuracy of about 15 cm (6 inches), 100 times better than any previous method.

But in recent years the accuracy has gotten down to nearly 1 mm, thanks to an effort led by Thomas Murphy (University of California, San Diego) using the 3.5-m reflector at Apache Point Observatory in New Mexico. (Amusingly, Murphy has named the effort the "Apache Point Observatory Lunar Laser-ranging Operation," or APOLLO.) Moreover, thanks to Lunar Reconnaisance Orbiter's images of the long-lost Lunokhod 1 rover (spotted by Russian scientists, by the way), the count of available reflector sites on the Moon now stands at five.

Some years ago, Murphy and his colleagues noticed that the laser pulses were coming back to Earth weaker than expected. "Each shot sends about 1017 [100 quadrillion] photons toward the Moon, and in good conditions we detect about one return photon per shot," the team noted in an article published in Icarus. That's only about a tenth of what should be coming back, leading to suspicion that a microscopic veneer of lunar dust has coated (or abraded) about half the area of the exposed optical surfaces.

But something else is causing weak returns, and the dropoff gets particularly bad (by another factor of 10) around full Moon. In Icarus, Murphy and his team surmised that the problem is due to distortions in the optics due to heat from the Sun. The Apollo program's prisms are recessed into shallow cylinders, so sunlight illuminates them fully only at high noon — that is, around the time of full Moon. The thermal effect is much worse for the Lunokhod arrays — they can't be used at all during the lunar day. 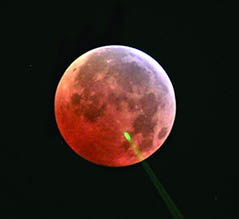 A powerful laser illuminates a spot of high thin clouds on its way to the totally eclipsed Moon in December 2010. The target was a bank of retroreflectors left on the Sea of Tranquility by Apollo 11 astronauts.

One way to confirm this hypothesis would be to monitor the reflectors' performance during a total lunar eclipse. The rapid plunge into shadow, Murphy reasoned, should allow the optics to cool and relax. Some earlier observations during eclipses already hinted that solar heating was indeed the culprit, but Apache Point was clouded out during lunar eclipses in 2007 and 2008.

Fortunately, clear skies prevailed during the total lunar eclipse of December 21, 2010, and for 5½ hours the team bounced laser pulses off three Apollo reflector arrays and a fourth on Lunophod 1. Sure enough, the efficiency immediately improved, as Murphy and others report in the March 1st issue of Icarus. Interestingly, none of the laser pulses fired at Lunokhod 1 during the eclipse resulted in detections. However, as the team comments, "In general, the Lunokhod arrays are more susceptible to thermal disruptions than the Apollo arrays, so the lack of returns from Lunokhod 1 during the eclipse is not entirely surprising."

If you'd like to learn more about the APOLLO laser-ranging program (and what it has to do with deviations in Einstein's theory of general relativity), check out this entertaining hour-long lecture recorded in early 2011.

Maybe we should send up replacement reflectors with covers, cooling systems, and little brooms on robotic arms.

Not satisfied with 1 mm accuracy? Come to think of it, they haven’t directly measured the predicted acceleration of its recession, only the recession itself. If they could measure Luna’s distance within a few microns, they might be able to measure the acceleration over a few decades and confirm that part of the theory.

SHOULD be so ... if the singular "coincidus" existed, at all. Does it exist? "Leo" dictionary, an Internet search and my Latin dictionary do not show the slightest hint at a word only remotely close to "coincidus" nor "coincidi", albeit that, of course, "incidere" (but not "co-incidere") actually DOES exist. I'd bet it should have read "coincidences" instead.