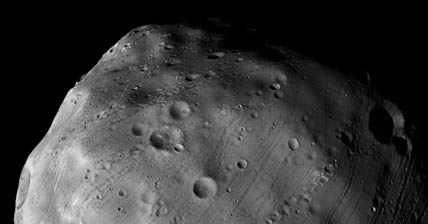 The High Resolution Stereo Camera aboard Mars Express took this image of Phobos on March 7, 2010. A flyby distance of 42 miles (67 km) yielded a resolution of about 14 feet (4.4 m) per pixel. Click here for a larger view.

One of the the solar system's most enigmatic moons, Phobos, had a visitor last week. On March 7th the European Space Agency's Mars Express orbiter cruised by at a distance of just 42 miles (67 km). This isn't the first close encounter of a spacecraft with the little Martian moon, an oblong body 17 miles (27 km) long. But the images released by ESA today are still stunning in their stark detail. The craft's High Resolution Stereo Camera captured views that resolve down to 14.4 feet (4.4 m) per pixel.

Mars Express is currently engaged in a series of 12 flybys of Phobos. Last week's encounter was close enough for Phobos's gravitational field to accelerate the spacecraft ever so slightly. The change in speed, though only a few millimeters per second, will permit tracking teams back on Earth to gain insight on how mass is distributed throughout the body's irregular shape.

Dull gray in color, Phobos exhibits remarkable grooves and crater chains that appear to radiate from the crater Stickney, 6 miles across. However, a 2006 analysis reveals that the grooves (which group into 12 distinct sets) were created from the debris splashed upward during cratering events on Mars.

Next year Russia plans to launch a spacecraft named Phobos–Grunt (meaning "Phobos Soil"). The plan is to touch down on its rubbly surface, collect a soil sample, and carry it back to Earth. To assist in the mission's planning, Mars Express photographed the landing-site candidates during the March 7th flyby.