After looking, digging, scraping, sniffing, and tasting Mars for five months, the Phoenix lander has apparently called it a day. NASA's tracking stations haven't heard from the robotic probe in more than a week, likely signaling the end of mission operations. 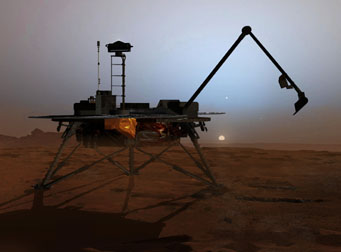 Flight engineers had believed that the craft would last a few weeks longer, but those hopes were dashed when a dust storm bloomed over the landing site last month and robbed the lander of some of the already-waning sunlight used to power its transmitter, instruments, and other electronic systems.

At a hastily convened press briefing today, mission officials lauded all that the lander had accomplished. "It's really an Irish wake and not a funeral," noted Doug McCuistion, who manages the space agency's Mars-exploration program. "We should celebrate what Phoenix has done."

Principal investigator Peter Smith, who's been working on the spacecraft for nearly 7 years, ticked off some of the scientific highlights to date: the discovery of extensive water ice underlying the landing site; some 25,000 images of the surface and atmosphere, from macro to microscopic scales; a complete 5-month-long weather record; chemical analyses showing that the surrounding dirt is mildly alkaline; and compositional results revealing the presence of carbonates, clay minerals, salts, and perchlorate (a minerals used as an energy source by some primitive organisms on Earth).

Smith acknowledged that the "sticky," cohesive character of the surface samples posed problems for getting them into Phoenix's miniaturized laboratories. One missed opportunity was the chance to get a really thorough analysis of the ice itself. But Smith hinted that detailed studies of the results in hand may yet reveal the presence of organic matter in one ice-rich sample.

The spacecraft is unlikely to survive the coming Martian winter, during which temperatures are expected to plunge to -240°F (-150°C). "We expect that it will become encased in frozen CO2," notes mission manager Barry Goldstein. Phoenix's fragile solar-cell arrays, not designed to support much weight, will "likely crack and fall off the vehicle."

You can read more about the bad news here, or instead you can revel in all that Phoenix has accomplished here.