Take a good look at the picture below, because it's one of the most amazing shots ever taken in the history of planetary exploration.

With a 6-mile-wide crater serving as a dramatic backdrop, NASA's Phoenix spacecraft parachutes toward the Martian surface (inset at lower left) on May 25, 2008. This remarkable view was captured by the HiRISE camera aboard the Mars Reconnaissance Orbiter, 200 miles (300 km) above the surface. Click on the image for the full-resolution view.

A lot of careful detailed planning went into getting this. The team behind the amazing HiRISE camera aboard NASA's Mars Reconnaissance Orbiter led by Alfred McEwen (University of Arizona) wanted to try to capture the Phoenix spacecraft as it descended by parachute to the Martian surface.

The team's aim wasn't to get a pretty picture. Instead, it was a way to keep an eye on the craft as it descended — in case anything went wrong, there'd be some photographic evidence to fall back on. The picture was snapped about 20 seconds after Phoenix's parachute deployed.

But, as with many stunning photographs, good luck and timing helped to create a remarkable composition. The 6-mile-wide crater in the background is unnamed, though the HiRISE and Phoenix teams have been calling it Heimdall, named for the mythic Teutonic god of light and guardian of the great bridge Bifröst.

Although Phoenix seems to be heading right into the crater and toward certain doom, it's really just an illusion of perspective. Actually the crater is about 12 miles farther in the distance. 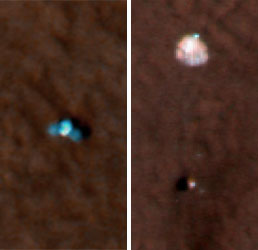 Taken on May 26, 2008, these views by the HiRISE camera on Mars Reconnaissance Orbiter show the Phoenix lander at left and its parachute (with part of the craft's protective enclosure still attached) at right. MRO took these views from an orbital height of 200 miles (300 km).

About 20 hours later, well after the successful touchdown, the orbiter again cruised overhead and was able to spot both Phoenix and its parachute on the surface.

HiRISE, which stands for High Resolution Imaging Science Experiment, hasn't really gotten the attention it justifiably deserves (and I'm guilty on this count). Hardly a "camera" in the traditional sense, it has 20-inch (0.5-meter) f/24 optics that pick out foot-size objects from MRO's 200-mile-high orbit. All you telescope junkies are no doubt drooling right now.

Oh, and did I mention that each full frame from HiRISE is 20,000 by 40,000 pixels? That's 800 megapixels each! Click here to get all the HiRSE specifications, and here to peruse its recent views.


Thanks; I've made the correction — Kelly Beatty