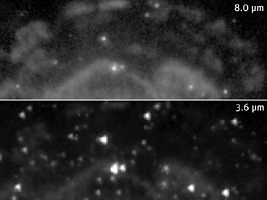 The infrared Spitzer Space Telescope is diffraction limited beyond 5.4 microns, producing nice, round star images, but at shorter wavelengths stars exhibit triangular skirts. This trefoil aberration arises in the telescope's secondary mirror, which is slightly distorted by its three-blade support structure. The close-ups reproduced here are from Spitzer's composite of the Ring Nebula, M57, in Lyra.

NASA officials acknowledge that two of the space agency's premier orbiting telescopes have something in common: imperfect optics. One is the 15-year-old, multibillion-dollar Hubble Space Telescope, which made "spherical aberration" a household term before being spectacularly rehabilitated by Space Shuttle astronauts. The other is the $720 million infrared Spitzer Space Telescope, launched into solar orbit in August 2003. But the similarity ends there. Hubble's problem went unnoticed until after the observatory reached orbit, and the telescope was scientifically crippled until its optics were corrected 3½ years later. Spitzer's less serious shortcoming was recognized by project astronomers during prelaunch testing but deemed inconsequential, and the telescope has proven them right by functioning as an astrophysical powerhouse despite its not-quite-perfect optics.

The problem has been hiding in plain sight since NASA released the first Spitzer image on September 3, 2003, a week after launch. At that point the 85-centimeter (33-inch), liquid-helium-cooled reflector — then called the Space Infrared Telescope Facility — hadn't yet been focused, so its decidedly triangular star images didn't raise any eyebrows. The telescope's focus was sharpened a month later, and since December 2003 Spitzer has produced a steady stream of dazzling infrared images revealing previously unseen phenomena in stars, gas clouds, and galaxies. 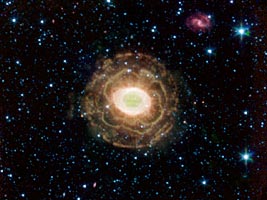 The Ring Nebula, about 2,000 light-years away in Lyra, was produced when a Sun-like star cast off its outer layers during the late stages of its hydrogen-burning life. In visible light we typically see only the bright inner shell of this planetary nebula, also known as Messier 57, but in this infrared image from the Spitzer Space Telescope we also see older, fainter loops farther out. Spitzer is sensitive to feeble infrared emissions from hydrogen molecules energized by the hot stellar remnant at M57's heart. Spiral galaxy IC 1296 is at upper right, just 4 arcminutes from the Ring — but millions of light-years farther away.

The latest photo from Spitzer, released earlier this week, shows the Ring Nebula (M57) in Lyra. Surrounding the familiar bright oval visible in backyard telescopes is a series of gaseous shells resembling the petals of a camellia. And, as in all Spitzer images, the brightest stars show a distinctive pattern of six spikes caused by diffraction from the three vanes supporting the telescope's secondary mirror. While examining the image closely, Sky & Telescope assistant editor Sean Walker noticed that the brighter stars exhibit a uniform triangular distortion reminiscent of a common optical aberration in many reflecting telescopes. "It looks like pinched optics," he commented. Sky & Telescope asked several Spitzer scientists about this and learned that NASA's infrared observatory suffers from a small amount of trefoil aberration caused by a slight distortion of the 12-centimeter-wide secondary mirror in its mounting.

"You haven't heard any talk of this because the telescope is better than the requirements," says deputy project scientist Charles Lawrence (NASA/Jet Propulsion Laboratory). "Nobody's trying to hide it." Indeed, the aberration was noted in papers presented in January 2004 at the Atlanta, Georgia, meeting of the American Astronomical Society and in June that same year at the Glasgow, Scotland, meeting of SPIE, the International Society for Optical Engineering. It's just that nobody outside the scientific community seems to have noticed — until now.

The "requirements" Lawrence mentioned are NASA's so-called Level One Requirements, which a space mission has to meet in order to be declared a success. In Spitzer's case, the agency specified that the telescope be diffraction limited — that it resolve detail at the theoretical limit of performance — at wavelengths as short as 6.5 microns. Spitzer's optics are actually a little better than this, being diffraction limited at 5.4 microns according to Robert D. Gehrz (University of Minnesota), facility scientist for the Cryogenic Telescope Assembly. "When you look at wavelengths shorter than this," says Gehrz, "you begin to see aberrations that deviate from diffraction-limited performance."

Spitzer's main imager, the Infrared Array Camera, has four channels that record the sky simultaneously in passbands centered at 3.6, 4.5, 5.8, and 8.0 microns. Thus images acquired in the two short-wavelength channels exhibit the trefoil aberration noticeably, whereas the other two channels are largely immune from the distortion. Spitzer's Multiband Imaging Photometer operates at wavelengths longward of 24 microns, so from its perspective the telescope is essentially perfect. The Infrared Spectrometer's short-wavelength channel reaches cuts off shortward of 5.3 microns, so for all practical purposes it too is immune from the aberration.

"Non-ideal image quality at wavelengths shorter than 6.5 microns was an expected outcome of our decision not to push diffraction-limited performance to shorter wavelengths," says Gehrz. "The Spitzer science program was designed with this in mind from the very beginning. There is no hit to imaging or spectroscopic sensitivity and/or resolution." 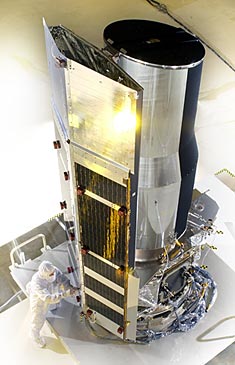 Why wasn't the telescope required to produce better images between 3 and 6.5 microns? Gehrz explains, "The decision to set our spec as we did was driven by considerations of cost and schedule that were determined by the state-of-the-art of beryllium optics technology at the time that the design and budget were frozen." The beryllium mirrors were figured at room temperature, then tested at their cryogenic operating temperature to see how closely they conformed to the proper shape, then the cycle was repeated. An end-to-end test of the complete telescope under simulated space conditions showed that the telescope produced pinpoint star images from 5.4 microns on up, but that shorter-wavelength star images had a faint triangular skirt around them.

"Since the telescope was exceeding the required performance," says Thomas Soifer, director of the Spitzer Science Center, "we decided that the cost and time required to remove the trefoil aberration were unnecessary. The magnitude of the aberration is small enough, and all science objectives are being met," he continues, "so we think of the trefoil as a feature of the telescope as built rather than a defect." Project scientist Michael W. Werner (NASA/JPL) adds that the faint triangular wings around stars are barely visible in the scientific images that astronomers are analyzing. They are accentuated in specially processed press-release photos because when the contrast is enhanced to pump up diffuse nebulosity in these "pretty pictures," the triangular fringes of the star images get boosted too. "It is misleading to liken this to the Hubble situation," says Werner. "Spitzer's optics are just as good as they have to be, whereas Hubble's were woefully out of spec."

"The Level One Requirements were set low enough to provide confidence that the telescope could be built and high enough to assure outstanding astronomy," adds Spitzer team member William F. Hoffmann (University of Arizona). "Both have been achieved. It would, of course, be even nicer if the optics were near perfect."