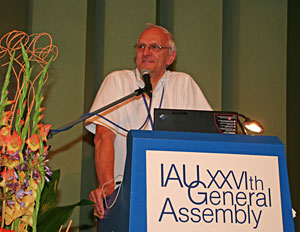 Iwan Williams (Queen Mary College, London) presides over the debate on the definition of a planet at the International Astronomical Union triennial general assembly in Prague on August 18, 2006.

All hell broke loose today as astronomers began openly debating the definition of "planet" at the general assembly of the International Astronomical Union (IAU) in Prague, Czech Republic. About 100 planetary scientists — and just as many interested onlookers from other disciplines — met to discuss the definition that was proposed earlier this week (see our August 16th story and Robert Naeye's blog) and that is scheduled for an up-or-down vote among all 2,500 attendees at the assembly next Thursday, August 24th.

The proposed definition, drafted by an IAU-appointed panel led by Harvard astronomer-historian Owen Gingerich, says that a planet is "a celestial body that (a) has sufficient mass for its self-gravity to overcome rigid-body forces so that it assumes a hydrostatic equilibrium (nearly round) shape, and (b) is in orbit around a star, and is neither a star nor a satellite of a planet." In this scheme the largest asteroid, Ceres, becomes a "dwarf planet;" Pluto and its largest companion, Charon, together constitute a "double planet;" and the so-called 10th planet announced last year, 2003 UB313, becomes the 12th planet instead. Pluto, Charon, 2003 UB313, and any future objects found in highly elongated orbits with periods longer than 200 years would further be classified as "plutons." 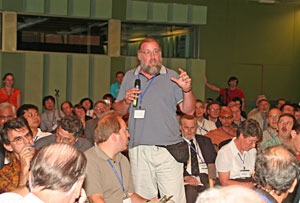 Hal Levison (Southwest Research Institute, Boulder, Colorado) makes a point during the IAU debate on what's a planet and what's not. Another round of discussion will occur on Tuesday, August 22nd.

Today's meeting quickly became contentious and at times seemed on the verge of a brawl as the assembled astronomers argued two key issues: Should planets be defined by internal properties such as mass or roundness, or by external properties such as the shapes of their orbits or their proximity to similar objects? And should the definition include or exclude Pluto and other bodies that are mere specks compared to the tiniest naked-eye planet, Mercury? One participant after another took the microphone to promote his or her own idea of what a planet is.

At one point in the debate, Gonzalo Tancredi of Uruguay offered up an alternative definition co-signed by 17 fellow planetary scientists. It says that a planet "is a celestial body that (a) is by far the largest object in its local population, (b) has sufficient mass for its self-gravity to overcome rigid-body forces so that it assumes a hydrostatic equilibrium (nearly round) shape, and (c) does not produce energy by any nuclear-fusion mechanism." This wording gives us only eight planets, demotes Pluto and 2003 UB313 to "planetoids," and leaves Charon a moon. Unlike the other definition, which is based on purely internal characteristics, this one factors in external ones too. It also addresses the currently fuzzy boundary between planets and the not-quite-stars known as brown dwarfs, objects that flicker with sporadic bursts of nuclear fusion in their cores. Some thought this last feature was a definite benefit, but IAU president Ron Ekers said that he hadn't asked Gingerich's group to worry about the high-mass end of the planet spectrum and wasn't particularly keen to consider it now. 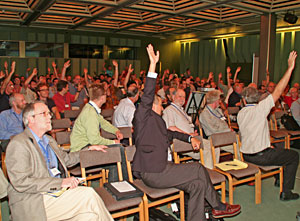 Planetary scientists cast their votes in a straw poll taken on August 18th. Here a majority are voting in favor of an alternative to the resolution already submitted to the IAU's executive committee. Back to the drawing board?

After a dozen or more other astronomers chimed in, sometimes barely containing their emotions and prompting one observer to label planetary scientists "belligerent and self-centered," session chair Iwan Williams decided to take a straw poll of the audience to see where things stood. When he asked who supports the definition proposed by the Gingerich panel, less than a quarter of the participants raised their hands. When he asked the same question about Tancredi's alternative, most of the rest of the audience members raised their hands. When he asked who hates the word "pluton," nearly every hand in the room went up. The ensuing burst of laughter helped calm everyone down.

Gingerich said he found the discussion "very muddled," but now he'll have a few days to try to clarify things. Before the discussion resumes at an open forum on Tuesday, his panel and the IAU executive officers will consider whether to revise the proposed wording of the definition before it's put to a vote two days later. Stay tuned!