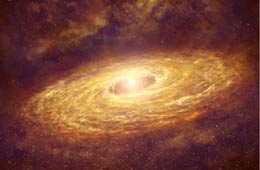 Evidence continues to mount that planets can form around very-low-mass objects. In fact, planets might even form around objects that are so low in mass that they themselves could be considered "planets."

Using two European telescopes in Chile, Jayawardhana and his colleague Valentin Ivanov (European Southern Observatory) acquired optical spectra of several free-floating substellar objects. Last year, a group led by Katelyn Allers (now at the University of Hawaii) discovered that these gaseous objects are surrounded by disks of gas and dust. Jayawardhana and Ivanov found that two of the bodies have masses only 5 to 10 times that of Jupiter. Some astronomers call such objects "planemos," short for "planetary-mass objects." The study revealed that two other objects have masses between 10 and 15 Jupiters, meaning they could either be planemos or brown dwarfs (the dividing line between planets and brown dwarfs is about 12 or 13 Jupiter masses).

Two of the objects show strong hydrogen-alpha spectral lines, which is strong evidence that the planemos are accreting material from their disks. "This happens in young stars and brown dwarfs, but these observations show that it might extend into the planetary-mass regime," says Jayawardhana.

Since planets form inside circumstellar disks of gas and dust, the findings bolster earlier observations showing that the same conditions that form planets around stars also exist around planemos. As reported in the March 2006 issue of Sky & Telescope, a team led by Kevin Luhman (Penn State University) has also found disks around planemos. However, the disks appear to be so small that they would only form very low-mass planets. 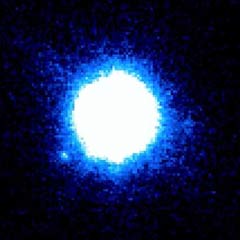 The Very Large Telescope in Chile acquired a saturated image of the brown dwarf 2M 1207 and its faint companion, the dot at the lower left. The companion is only eight times the mass of Jupiter, but it appears to be surrounded by a disk. Click on the image to view a larger version.

Mohanty's group, which includes Jayawardhana, studied a peculiar object known as 2M 1207b, which has only about 8 Jupiter masses. This body, which was discovered in 2004, orbits a brown dwarf known as 2M 1207 — a substellar gas ball that is about 25 times more massive than Jupiter. The primary object was already known to have a disk. However, using the 8.2-meter Yepun reflector of the Very Large Telescope, Mohanty's group found that 2M 1207b is about 8 times dimmer than expected in infrared light. After ruling out other possible explanations, Mohanty interprets the faintness as an indication that an edge-on disk blocks some of the body's light. This disk also could potentially form planets.

"Their evidence of a disk is indirect and sensitive to one's interpretation of the data," says Luhman. "The problem is that normal methods for detecting disks don’t work for 2M 1207b because it's too close to the primary object and cannot be resolved."

The 8-Jupiter-mass companion is about the same distance from the brown dwarf as Pluto is from the Sun. Given the large separation and the relatively small difference in mass between the two objects, Mohanty's group thinks that the two objects formed in the same way as binary stars, rather than the companion forming in a disk around the primary. "Mass ratios of that size are more typical for binary stars than for planetary systems," says Mohanty. "2M 1207b probably formed like a star, together with the brown dwarf, rather than from core accretion like giant planets around other stars."

The two objects are about 170 light-years from Earth in the constellation Centaurus. An international team led by Gaël Chauvin (European Southern Observatory) has claimed that its 2004 picture of 2M 1207b represents the first direct image of an exoplanet ever taken. But if the object indeed formed in the same manner as a star, it's unclear whether it should be considered a planet or a very low-mass brown dwarf.

A Superfast Star from Far, Far Away