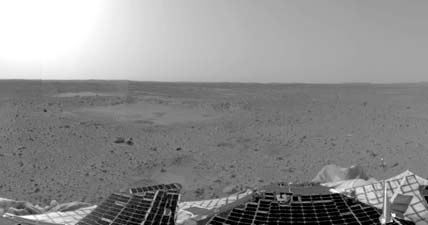 NASA's Spirit rover shot this low-resolution image of a light-colored terrain dubbed Sleepy Hollow. It appears to be a shallow crater — perhaps a secondary crater from a much larger impact.

Remember the name "Sleepy Hollow." In images released today by scientists working with the Spirit rover on Mars, the newly discovered, light-colored feature (the first Spirit-site landmark to be given a name) will likely be the initial objective for the rover when it starts to roll around next week.

At a press conference today, Mars Exploration Rover principal investigator Steven W. Squyres (Cornell University) reported "more good news." The craft is alive and healthy, and so far all of its instruments appear to be in perfect working order. One final instrument, the Miniature Thermal Emission Spectrometer, will undergo a checkup the next time the Sun rises on Mars. In addition, the direct communication link between the rover and Earth is strong and Spirit is also sending data via Mars Odyssey, which is orbiting overhead. Currently data from Mars is coming to Earth at more than 1 kilobyte per second — the fastest expected rate. As an added bonus Spirit successfully reached its target inside Gusev Crater within about 200 meters (650 feet).

The Spirit team released a handful of images including one of the Sun and a low-resolution 3-D panorama of the landing site. The latter reveals the inside of Gusev to be quite flat with hill-like features in the distance and rocks strewn across the landscape. For now, astronomers don't know much more than that. Ranging data, high-resolution images (14 times sharper than what has been seen thus far), compositional information about the region, and other details will become available in the coming days as Spirit completes its diagnostics and begins to assay its surroundings.

But the scientists already have a target that they are keen on visiting first. Dubbed Sleepy Hollow, 3-D images reveal the light-colored landform to be a crater of unknown depth. On the far ledge, as seen from the rover, is a relatively high crater wall; the close side of the rim looks smooth. Layers of Martian dust, Squyres suggests, might have filled the pit over time.

Moreover, inside the Hollow are a pair of dark spots. They might be bounce marks from the rover's landing sequence. To set down safely on the red planet, the rover first parachuted toward the ground and then finished its descent encased in protective airbags. It bounced perhaps a dozen times until coming to a stop. Squyres postulates that the dark regions may simply be freshly overturned Martian terrain.

While astronomers still aren't sure exactly what surrounds Spirit, there is some speculation that the rover is parked within a secondary-crater field. When a meteroid hits a planet's surface, it blasts away debris. When that debris rains back down, it forms secondary craters. Determining whether Spirit is actually in a debris field will be one of the many questions answered in the coming days and weeks.