The view of Earth from Pluto's perspective during the little planet's two occultations in mid-2002. July's track over South America barely missed several large observatories, while the August event could be viewed by large telescopes in Hawaii, California, and Arizona.

Distant Pluto has been traveling farther from the Sun since its 1989 perihelion, and astronomers worry that the diminishing sunlight will cause what little atmosphere the planet has to "collapse" as frost onto its surface. But for now, at least, Pluto seems to be holding its own. Results from a pair of recent stellar cover-ups suggest that the planet's atmospheric pressure has nearly tripled during the past 14 years and that the surface temperature increased some 2° Celsius during that timespan.

"It's very obvious that there's been a fundamental change," observes Marc W. Buie (Lowell Observatory), who was among those presenting Pluto results at a meeting of the American Astronomical Society's Division for Planetary Sciences.

The exact cause for the warming remains unclear. There's some evidence that Pluto's icy surface has become darker overall in recent years, allowing it to absorb more of the weak sunlight and drive more gas into the atmosphere. Alternately, a frost layer near the north pole (now experiencing its spring season) may be sublimating more vigorously. David J. Tholen (University of Hawaii) thinks that the planet's surface is only now reaching its peak warmth after passing through perihelion. "The hottest part of the day on Earth is usually around 2 or 3 p.m., rather than noon," he explains.

The only other record of Pluto occulting a star, in June 1988, revealed that the diminutive planet has a thin nitrogen atmosphere laced with trace amounts of methane and carbon dioxide. Astronomers waited patiently for another such opportunity, and by chance the distant planet passed over two stars in a five-week period. The first event, on July 20th (Universal Time), had a path that crossed central South America — yet it was recorded by only two portable telescopes in extreme northern Chile. However, on August 20th Pluto's shadow passed directly over the array of observatories atop Mauna Kea and Haleakala in Hawaii. This event was also seen by observers at Lick and Palomar observatories in California and at Lowell in Arizona.

Two large research teams, led by James L. Elliot (MIT) and Bruno Sicardy (Paris Observatory), mounted observing campaigns for this year's events. They agree that the atmospheric pressure has jumped but remain divided on whether the wispy airmass has the same basic structure seen 14 years ago, or whether new features have appeared. Elliot notes that Pluto's case bears similarities to the situation on like-sized Triton, Neptune's largest moon, whose thin atmosphere has also warmed in recent years. But months of tedious analysis remains before the light curves' subtle bumps and squiggles can be fully understood. 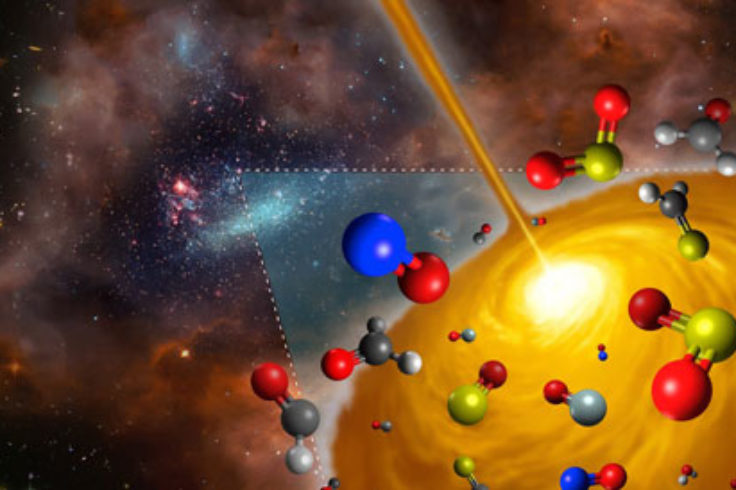 Taking Note of Molecules in Space