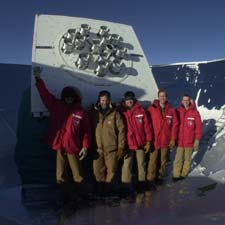 These scientists are posing beside DASI, a compact 'telescope' that gathers microwave radiation from the universe's infancy. DASI's latest discovery, announced today, adds credence to the new paradigm of an accelerating universe.

By measuring the polarization of the cosmic microwave background radiation — an unprecedented technical achievement — radio astronomers have proven once and for all that the microwaves really are the Big Bang's afterglow. University of Chicago astronomer John Carlstrom broke the news today at the Adler Planetarium and Astronomy Museum, which is hosting a conference for many of the world's leading cosmologists.

The cosmic microwave background radiation, or CMBR, has very subtle "hot" and "cold" spots, or anisotropies, where its temperature departs by a few parts in 100,000 from an average value of 2.7° above absolute zero. These anisotropies have become increasingly useful for measuring the universe's shape and contents. The latest CMBR studies suggest that (a) space is flat; (b) about 5 percent of the universe's mass-energy budget is "ordinary" baryonic matter; (c) the dark matter holding galaxies and galaxy clusters together constitutes another 25 percent or so; and (d) the universe is mostly "dark energy," the mysterious force that is accelerating the universe's expansion.

But polarization codiscoverer Erik Leitch (University of Chicago) cautions that those conclusions are predicated upon the assumption that the CMBR indeed dates from the decoupling era some 400,000 years after the Big Bang, when matter had cooled enough for atoms to form, allowing radiation to fly freely through space for the first time. Skeptics maintain that CMBR anisotropies might conceivably be "shadows" cast upon the decoupling-era glow by intervening galaxy clusters or by rogue electrons in our Milky Way's interstellar medium. 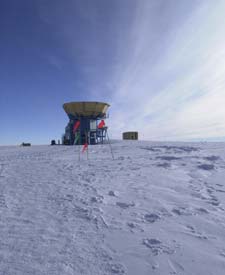 DASI stares at the sky from this enclosure at the Amundsen-Scott South Pole Station.

Yet, if the microwave photons had to fight their way out of the early universe's relatively dense plasma, they would've scattered off of its constituent electrons. "Scattering always produces polarized light," says Leitch. Thus cosmologists have long expected to find polarized microwaves near the edges of the CMBR's hot and cold spots, which span slightly less than 1° on the plane of the sky. However, until the Degree Angular Scale Interferometer (DASI) — an array of microwave receivers on the South Pole — spent more than 200 days staring at two 3½°-wide spots on the far-southern sky last year, no one had been in a position to measure such polarization.

Leitch stresses that the newfound polarization won't immediately improve measurements of the universe's dark matter or dark energy. Rather, he says, "the polarization detection is telling you that the framework is correct," and the CMBR really dates from the universe's infancy. Nor is DASI presently in a position to detect the vastly more elusive polarization pattern that gravitational waves presumably imprinted upon the microwave sky. That prize — a fundamental prediction of the inflation theory — must await a much more sensitive instrument, possibly the Planck spacecraft now slated for launch in 2007.