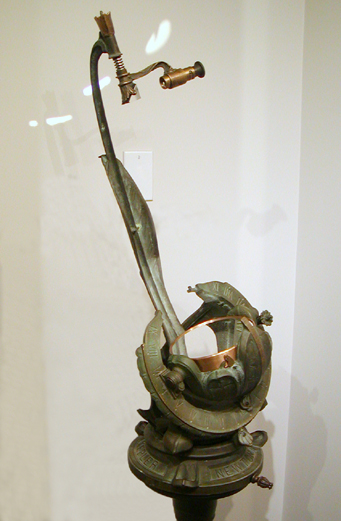 This Porter Garden Telescope, which just sold at auction for $18,000, bears the highest serial number (53) of any of the surviving examples known. The primary mirror and diagonal prism are not original.

It’s not every day that a Porter Garden Telescope goes on the auction block — try once a decade or so. But this did happen March 24th at the Science & Technology Auction held by Skinner, Inc., in Boston, Massachusetts. A bidder from the Internet quickly snapped it up for $18,000, to the dismay of several hopefuls in the audience almost before they could react.

Russell W. Porter, founder of the amateur-telescope-making movement in America, designed and patented this fully operational 6-inch f/4 telescope in the 1920s. Magazines like House Beautiful and Country Life carried ads for them. Their ornate bronze castings were meant to stay outdoors as garden statuary, the owner simply detaching the primary mirror and eyepiece-diagonal assembly to take in out of the weather.

Perhaps fewer than 60 garden telescopes were ever made. Porter biographer Berton C. Willard knows of only 14 that have certainly survived, one being serial number 49 at the Smithsonian Institution in Washington, DC. (But if you’ve “gotta have one,” take note: A fully functioning reproduction of the garden telescope should be available this summer.) 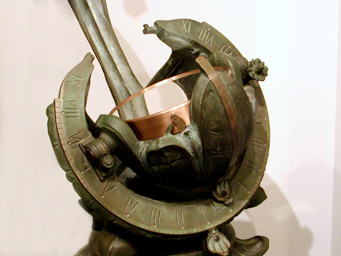 With its 6-inch mirror cradled in lotus leaves of cast bronze, the garden telescope features a split-ring equatorial mounting.

Another Porter item in the sale was a rugged, pier-mounted 6-inch reflector that looked a little the worse for wear. No surprise here: It is believed to have been hauled by mule up various mountains to perform site tests for the Hale 200-inch reflector in the 1930s. Fitted with its original primary mirror inscribed "R.W.P., Fred" (referring to Porter’s collaborator, Fred Fergason of Corning), it fetched $1,000.

The bidding reached $1,300 on a 4-inch refractor by the early-20th-century American maker W. & D. Mogey, but that wasn't high enough to meet the reserve placed on it by its owner. Right afterward, however, an original printed catalog from the Mogey firm sold for $150.

Among other items, an octant by the London firm of Spencer, Browning & Rust went for $2,500. Also on display was a rare school’s tellurion and hand-cranked orrery showing a miniature Earth, Moon, seven planets, and their satellites as known in the 1850s. This auction highlight brought $37,500. (Note: All amounts mentioned in this article are “hammer prices” and do not include buyer’s premium.)