Just after sunset, at the terrace of the Sky Bar in downtown Tucson, Arizona, amateur astronomer Robby Tackett sets up his giant 20-inch (50-cm) telescope. Soon, people are enthralled by the grandeur of Saturn and the Orion Nebula. "It's amazing," says one girl. What state would be a better home to sidewalk astronomy than Arizona? Not too far from Tucson are four major astronomical observatories. In the last week of April, I visited all of them, and I wasn't disappointed. Fifty years ago, fellow Dutchman Gerard P. Kuiper chose Mount Bigelow in the Catalina Mountains northeast of Tucson as the site for a new 61-inch (155-cm) telescope, used to produce a photographic atlas of the Moon. 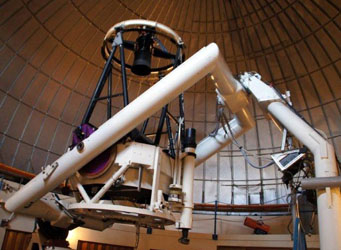 
Govert Schilling
Today, the distinguished Kuiper Telescope has a smaller neighbor: a 27-inch (68-cm) Schmidt telescope used by the NASA-funded Catalina Sky Survey (CSS) to search for near-Earth objects (NEO's). The CSS consortium operates a second, 1.5-meter telescope at nearby Mount Lemmon and a third one in Australia. "We found about 70% of all known NEOs," says principal investigator Ed Beshore.

Beshore shows me the latest addition to the CSS: a 1-m telescope, also at Mount Lemmon, that will be used for follow-up observations. It will see first light later this year. Meanwhile, plans have been drawn up for a much larger, $30,000,000 CSS-II, that would use six 72-inch (1.8-m) mirrors on three separate mounts. Says Beshore: "If I have to put Google or Domino Pizza on the side of the telescope [to fund it], I'll do it." 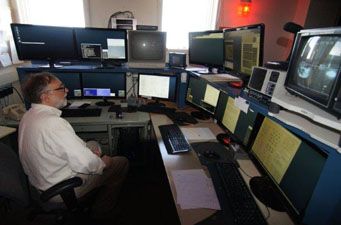 Bob McMillan at the controls of the Spacewatch telescopes.

At Kitt Peak National Observatory, some 45 miles (70 km) southwest of Tucson, the Spacewatch Project also searches for asteroids and NEOs. Spacewatch, led by Bob McMillan, uses a 1.8-meter and a 0.9-meter telescope. Asteroid 2005 YU55, a 400-meter chunk of stone that will zip past the Earth at just 200,000 miles (325,000 km) on November 8th, was discovered by Spacewatch.

In the Kitt Peak kitchen, I enjoy a Mexican dinner with McMillan and with Steve Pompea, the public information officer of the National Optical Astronomy Observatory (NOAO), which runs the observatory. Pompea shows me around most of the telescopes at Kitt Peak, including the slender and compact 3.5-meter WIYN Observatory and the impressive McMath-Pierce solar telescope. Never before have I seen so many telescopes on one single mountain. 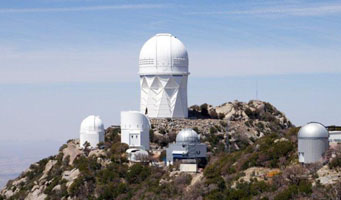 The 4-meter Mayall Telescope dominates the skyline of the Kitt Peak National Observatory.

And I'm even more impressed by the amount of public outreach carried out at Kitt Peak. Most telescopes have viewing galleries for visitors. There's a great visitor center with a nice shop. There are guided tours and stargazing sessions, using a dedicated 16-inch (40-cm) telescope. Every year, thousands of people find their way to the beautiful and friendly site, which is dominated by the tall building of the 4-meter Mayall telescope.

Unfortunately, the darkness of Kitt Peak's night sky is threatened by (slowly increasing) light pollution — not so much from nearby Tucson, which is pretty astronomy-friendly, but from remote cities like Casa Grande and even from Phoenix. "It's worrisome," says Pompea.

That evening, at the Sky Bar on 4th Avenue, I marvel at Saturn as seen through Robby Tackett's telescope. Yes, this is something everybody should see. And if you've never been to Kitt Peak, don't wait too long.

Part 2 of this blog, about the MMT Observatory and the Large Binocular Telescope, can be found here.

On Thurs 4/28, AAVSO announced a supernova in NGC 3972. This was a chance for amateurs with 8 inch scopes and larger to see, on a weekend with no moon, a star that exploded 70 million years ago. Instead we get things like this and shutting down SETI projects (I know, that was before the SN, but it is relevant). Maybe there is something here about the supernova, but I have not been able to find it. Luckily I have a friend in the AAVSO who told me about it on Thursday. This allowed me and at least three other observers, in addition to herself, to see it on the weekend. Since I live in New England, Saturday may have been my only chance with no moon. 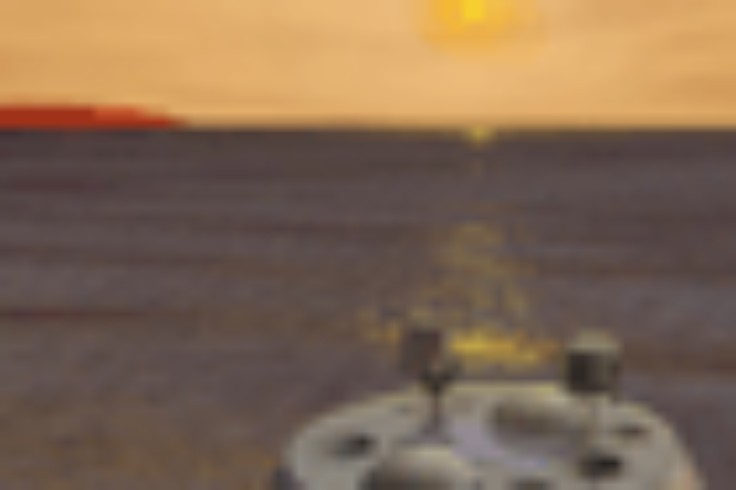