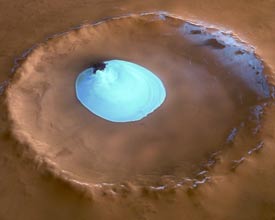 Scientists combined several images from Mars Express to create this 3-dimensional image of a 35-kilometer-wide (22-mile-wide) unnamed crater in the far northern hemisphere. A patch of water ice sits on the crater floor. The colors are very close to natural, but the vertical relief is exaggerated three times. Due to the angle of solar illumination, frost remains on the crater's southern (right) rim. Click on the image to view a larger version.

Since it entered Martian orbit in December 2003, the European Space Agency's Mars Express spacecraft has advanced humanity's knowledge of the Red Planet through cutting-edge spectroscopy and beautiful imagery. In recent months, the instrument-laden orbiter has detected evidence of methane and formaldehyde in Mars's thin atmosphere, and it has even captured ultraviolet emission from auroras.

But much more is to come. Last week, ground controllers successfully deployed the second of two 20-meter-long booms belonging to MARSIS, the spacecraft's powerful ground-penetrating radar. The successful deployment of its third boom, which is 7 meters long, could be announced very soon. Once science operations commence, the instrument could map water ice as much as several kilometers beneath the surface.

Meanwhile, the High Resolution Stereo Camera (HRSC) continues to take breathtaking images, like the one above. On February 2nd, the spacecraft flew over this 35-kilometer-wide crater in Vastitas Borealis, a broad plain that covers much of Mars's far northern latitudes. Back on Earth, scientists at Free University in Berlin, Germany, combined several HRSC images of the crater to create this 3-dimensional picture. The image reveals a patch of ice that could be a few tens of centimeters (a few inches to a few feet) thick. The ice itself overlies a dune field.

Ice normally sublimates (turns directly from solid to gas) at the crater's 70.5° latitude. But as Stephan van Gasselt (Free University) notes, "The protected location on the crater floor favors the preservation of water ice, even in the late summer when this image was taken." The ice must be made of water rather than carbon dioxide because CO2 sublimates completely in the north polar cap during the summer, and temperatures are even warmer at the crater's latitude.

Spectacular Occultation and Graze of Regulus