We've recently had a stretch of hot summer weather in Boston that's left everyone a little withered. But imagine the kind of scorchers we'd endure if our planet orbited a star 265 times more massive than the Sun, with 9 million times its brightness and a surface temperature of 95,000°F (53,000 K). Pass the sunscreen! (Back-of-the-envelope calculation: Earth would be heated to 15,000 K, meaning vaporized.)

A star like this is so massive that it flies in the face of what astronomers believed even possible. They've assumed no single star could exceed about 150 Suns, because larger ones would generate so much energy they'd blow apart.

R136 is a cluster of roughly 100,000 young, massive stars in the Tarantula Nebula, located 165 000 light-years away in the Large Magellanic Cloud.

Yet observers led by Paul Crowther (University of Sheffield, England) have found not just one such behemoth but several. They're embedded in two young clusters in the southern sky: NGC 3603, located some 20,000 light-years away in the Milky Way's Carina arm; and R136, the star-dense heart of the Tarantula Nebula in the Large Magellanic Cloud.

These clusters have been suspected of harboring truly massive stars for some time. But the record-setting estimate emerged after Crowther and his team studied them at infrared wavelengths with the European Southern Observatory's Very Large Telescope, then reexamined archival observations of NGC 3603 made by the Hubble Space Telescope. The team's analysis of the eight supermassive stars they found appears in July's Monthly Notices of the Royal Astronomical Society. 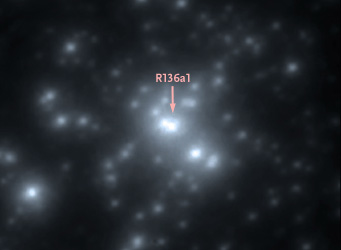 This close-up of the R136 cluster, taken with the Very Large Telescope at the infrared wavelength of 2.2 microns, reveals a clutch of supermassive stars that includes R136a1. The field of view is about 5 arcseconds wide.

The top dog, dubbed R136a1, supposedly tips the stellar scale at about 265 Suns — the most massive star ever found. (The showy but unstable star Eta Carinae, by comparison, outweighs the Sun by 90 to 100 times.) Other massive-star experts remain skeptical, however, because the mass hasn't been measured directly — it's inferred from the star's temperature and the rate at which it's blowing off a thick stellar wind. The exact behavior of stars this extreme is not very certain, however, while the gold standard for stellar masses is a "dynamical" measurement: of their actual gravitational force in a binary system.

Three other hypergiants in R136 range between 135 and 195 Suns, though one of these is likely an unresolved pair. Together these four sumo stars pump out nearly half of the radiation coming from the entire 100,000-member cluster.

R136a1 probably had an even larger mass, about 320 Suns, when it blazed to life a million years ago. Since then, ferocious stellar winds probably stripped away a fifth of its heft — a Sun's worth of mass-loss every 20,000 years. Already in middle age, it's probably got another million years to go before exploding catastrophically as a supernova — and thankfully we're 170,000 light-years away. 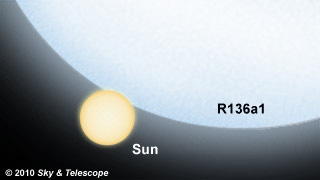 Astronomers estimate that the star R136a1, the most massive star known, is about 35 times the Sun's diameter and 265 times its mass.

Some theorists suspect that such an enormous star will blow up as a supernova prematurely, well before its core collapses in the usual way. Hydrogen-fusing cores should create large numbers of electron-positron pairs — matter and antimatter — once they exceed 35 Suns in mass. These "pair-instability" supernovae are something special because they blow themselves apart completely, leaving behind no stellar remnant and ejecting up to 10 Suns' worth of iron into interstellar space. However, Crowther doesn't think any of the eight stars in his team's study are candidates for this kind of finale.

If the group's claim holds up, R136a1 is likely to retain the title of Most Massive Star for a long time. "Owing to the rarity of these monsters," Crowther comments in an ESO press release, "I think it is unlikely that this new record will be broken any time soon."

Thanks Kelly for this clear and informative article. When I heard about this discovery on NPR, I knew I would get the full story from Sky and Telescope.

Thanks Kelly for this clear and informative article. When I heard about this discovery on NPR, I knew I would get the full story from Sky and Telescope.

Recently we (Amit Kashi and Noam Soker) suggested that Eta Carinae is the most massive binary system in the Galaxy.
The primary Luminous Blue Variable (LBV) star had a mass of
240 times the solar mass before the Great Eruption (before 1838). Its initial mass could have been a little larger, say 250-260 Suns. Its present mass was found to be 180-200 Suns. The main sequence secondary has a mass of up to 80 Suns. The cited numbers of 90 to 100 times the solar mass are probably too low.

These conclusions were obtained from a dynamical model of the binary system throughout is two major eruption in the 19th century, which included mass loss from the system and mass transfer between the LBV to its main sequence companion.

In addition, the luminosity of the LBV primary, 4.5 million times the solar luminosity fits a star of initial mass of about 250 Suns.

So apparently the claim that scientists thought that 150 Sun is the maximum size that stars could have reach is exaggerated.

Looking at a small star color/temperature chart, this baby should be between a blue giant and a violet giant. Violet corresponds to the temperature of 100,000C and blue giants at 25,000C. this one is 53,000C inbetween blue and violet. Am I correct?