Galactic cosmic rays and high-energy solar particles, recorded aboard NASA's Curiosity rover during its 8½-month interplanetary cruise, will give future astronauts a significant — but not excessive — dose of radiation on a round-trip journey to Mars.

Ever since Victor Hess discovered cosmic rays in 1912, scientists have come to realize that space radiation is one of the most formidable hazards during long-duration space travel. A typical astronaut aboard the International Space Station, even while protected by the craft's outer hull and Earth's magnetosphere, absorbs as much radiation in a six-month stay as we ground-dwellers do in 20 years. Head deeper into space — say, on a mission to a nearby asteroid or to Mars — and the risks are magnified considerably. 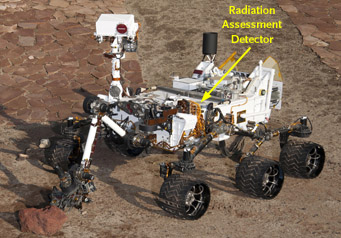 Plenty of craft have monitored space radiation over the years, but those detectors were completely unprotected in order to get "raw" measurements. Now, however, researchers finally have an idea of how much an astronaut would get zapped inside a reasonably well-shielded spacecraft cruising through the inner solar system.

The findings come from the Radiation Assessment Detector (RAD) that took an 8½-month ride to Mars aboard NASA's Curiosity rover. During that long cruise, RAD was installed inside Curiosity, which in turn was sandwiched inside a coccoon-like aeroshell with the rocket-propelled descent stage over it and a thick heat shield below it. This gave RAD shielding from space radiation much like what NASA engineers are building into the forthcoming Orion crew capsule. 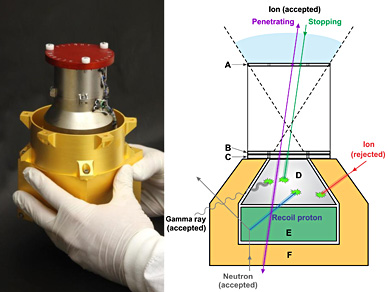 The Radiation Assessment Detector on Curiosity is a small unit that records space radiation entering from a wide cone of space or sky. But particles with very high energies can enter from any direction.

Weighing just 3.8 pounds (1.7 kg), the instrument has an upward-looking "telescope" that lets radiation enter through a 60°-wide cone, and it registers hits from two kinds of high-energy particles. There's a constant background of galactic cosmic rays (GCRs), stripped-down nuclei of various atoms, that arrive from the depths of interstellar space at relativistic speeds and can pack a punch of 500 to 600 million electron volts (MeV) or more. The other major source comes from the Sun in the form of high-energy protons, helium ions, and a few heavier ions. Sporadic flares and coronal mass ejections accelerate these solar energetic particles (SEPs) to energies of up to a few hundred MeV. Both types are harmful because they ionize the atoms in any tissue they're passing through.

As reported by Cary Zeitlin (Southwest Research Institute) and others in Science for May 31st, the RAD instrument recorded the equivalent of 0.466 sievert (a unit of measurement for tissue exposure to ionizing radiation) while en route to Mars. Almost all of that came from cosmic rays: although RAD recorded five distinct pulses of SEPs between early December 2011 and mid-July 2012, those accounted for only about 5% of all the particles detected. These results are actually quite close to researchers' previous estimates of radiation exposure. 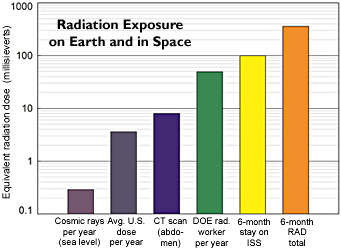 This logarithmic plot compares various radiation dosages. The "dose-equivalent" units are millisieverts, a unit that takes into account a factor for the energy-absorption characteristics of biological tissue. Click here for a larger version and fuller explanation.

"In terms of accumulated dose, it's like getting a whole-body CT scan once every five or six days," Zeitlin notes in a SwRI press release. To put this in perspective, NASA draws the line at 1 sievert of accumulated radiation exposure over an astronaut's entire career, a dose that statistically increases the chance of cancer-induced death by 3%.

Based on the RAD results, a round-trip mission to Mars involving about 360 days of interplanetary travel would expose the crew to about 0.6 sievert of radiation. That's a lot of radiation, though under the established lifetime limit.

But predicting the harm from space radiation is an inexact science. For example, the Sun was relatively quiet during Curiosity's long cruise — yet much more potent solar flares can and do occur. Also, women are more susceptible than men to a given radiation dose because they have lower body masses. And no one really knows how much tissue damage the highest-energy cosmic rays can cause, making assumptions about exposure uncertain.

Still, it's progress. "Scientists need to validate theories and models with actual measurements, which RAD is now providing," notes principal investigator Donald Hassler "These measurements will be used to better understand how radiation travels through deep space and how it is affected and changed by the spacecraft structure itself."

“…a dose that statistically increases the chance of cancer-induced death by 3%.” Anyone taking a roundtrip journey to Mars is going to have to accept some risk.

I may be missing something. I thought it took 9 months to get to Mars and 18 months to return. In that time a human would get well over 1 sievert of radiation. Including the required stay at Mars for the Earth return window to open, how long would a round trip take?

the articles concerning the radiation levels to Mars and Saturn are impressively intimidating considering that none of the shielding that would be provided for human exploration is being considered. it would be very easy to prove that sunlight causes sunburns and possibly cancer if one is overexposed. without any mention of sun screen our beaches could end up deserts. people would be afraid to go outside.

the presentation of the data is intimidating and may effect instinctively practical young minds that could be good future explorers.

hi, Robert... for planning purposes, NASA is assuming it takes only 6 months to reach Mars. that's about the fastest you could get a crew there on a "minimum-energy trajectory".

What I call a transfer orbit (see below) and have done the simplest of calculations for takes about ~8 months one-way (~240+ days), but you have to time things so you reach Mars when it is near perihelion.

You then have to stay there ~3/4ths of a synodic period in order to catch the flip side of the transfer orbit back and have Earth be where you want it, which means ~585 days on Mars.

The total trip time comes in at just under three years (~1070 days).

Net: To do it in six months would require something else.

These findings are very useful in giving us a more specific understanding of one potential risk of a human mission to Mars. But we also need to ask a deeper question: what are the relative costs and benefits of sending a very small number of highly vulnerable humans on a round-trip mission to Mars, vs. sending a much larger number of much more robust robots on one-way missions? In economic, scientific, and humane terms, robots win hands-down. The price of a video of an astronaut raising a flag on the Martian surface would be unacceptably high. And fantasies of human colonies on Mars are just that, only fantasies. For better and worse, Earth is the only home we're ever going to have. We should take better care of her.

One way to mitigate exposure to Solar wind particles would be to generate a magnetic field which envelopes the spacecraft. This would be some help but probably not good enough to deflect cosmic rays.

Anthony Barreiro’s points are hard to argue with, aren’t they? We may want to see members of our species on Mars, but just wanting something doesn’t make it wise. Allan Holmgren’s magnetic shield suggestion is interesting, but how much mass would be required for such a generator? And wouldn’t such a field also become a charged particle as well as a metallic asteroid attractor? You’d need a secondary shield in addition to the magnetic one. (Earth comes equipped with both, a massive magnetic dynamo in the deep interior and an atmospheric shield to mitigate what the magnetic field doesn’t deflect.)

2nd Anthony Barreiro's remarks. The motivation is hoping to find life or traces of life past on Mars, and the thinking is that humans would be better at finding evidence than robots. It’s an interesting question, but not as important as keeping this planet livable.

Some individuals are so motivated to be on Mars that I fully expect a privately-funded company to put humans on Mars eventually, thus negating the robot vs. humans argument - the high price of that flag-planting video will be of no concern to tax-payers...