Radio Astronomy in the Aussie Outback

The incredibly remote array of 36 radio antennas at Murchison in Western Australia, far from any source of interference, is officially known as the Australian SKA Pathfinder. Thanks to phased-array feeds, this interferometric array can observe a whole patch of the heavens at once. 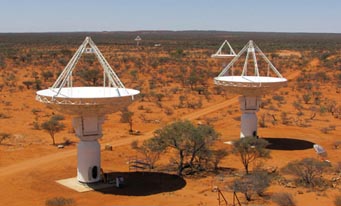 Four of ASKAP's 36 antennas at the Murchison Radio Observatory, which is located in a remote region of the Outback some 300 miles (500 km) north of Perth.

It's not easy to get to the Murchison Radio Observatory in Western Australia — but that's a good thing.

Being in one of Western Australia's most remote regions, almost devoid of townships, roads, and people, means there's hardly any radio interference that might otherwise compromise the facility's cosmic observations. Whereas optical astronomers have to worry about light pollution, radio astronomers cherish the most radio-quiet zones on the planet. And Murchison is certainly one of them.

There's another reason why it's hard to get to MRO, which officially debuted on October 5th and is operated by the Commonwealth Scientific and Industrial Research Organization (CSIRO), headquartered in distant Sydney. Because of the observatory's remoteness, and because of the extreme harsh environment, health and safety regulations for any visit there are very strict. So if you just happen to drive your 4x4 Toyota Land Cruiser up to the gate, after a 150-km trip across unpaved desert roads, without having made proper arrangements with the Sydney office, there's little chance you'll be let in. 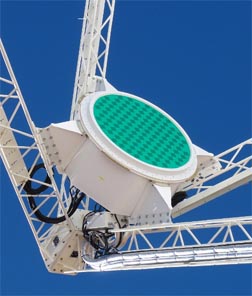 This phased-array feed allows the ASKAP radio telescopes to study a relatively wide area of the sky at one time.

Fortunately, MRO site manager Barry Turner at least had a fair sense of hospitality. "Since you're at the gate anyway, I'll send someone over and see what we can arrange," he told me over the phone. A half hour later, Wilfredo Pena (MRO's head of health and safety) took us on a crash course about the hazards of dehydration, sunburn, snakes, and faltering automobiles. Only then could Turner give us a guided tour.

But "comparable" doesn't mean "the same". ASKAP's Chinese-built antennas are smaller — 12 m across versus the EVLA's 25-m dishes — and they can't be moved across rails. Instead, they're mounted on fixed pedestals, distributed across a desert area some 6 km across.

Nevertheless, ASKAP is much more efficient than are most other radio interferometers. That's because it is outfitted with phased array feeds: instead of pointing to one object in the sky at a time, these receivers actually observe a whole patch of the heavens in one fell swoop. "This means ASKAP will generate about a hundred times more data than existing arrays," says Turner. "Eventually, our daily data traffic will be about the same as that of the World Wide Web."

To combine all the antennas' data, a huge server park is being created in MRO's brand-new control building. Most of the rooms there are still pretty empty, and the same is true for most of the server racks in the correlator room. "Right now, we are testing the correlator setup for a small test array of the first six antennas," says Turner. "The results look very promising."

Actually building the observatory has been, by far, the biggest challenge. Murchison Shire has a total population of just 120 people — yet it's bigger than Rhode Island and has 2,500 kilometers of unpaved roads, which can turn into wild rivers after heavy rainfall. Many roads had to be improved during MRO's construction, and according to Turner, 90 "road trains" (massive Australian trucks with three or more trailers) were needed to transport all the antenna parts from Perth, more than 500 km farther south. 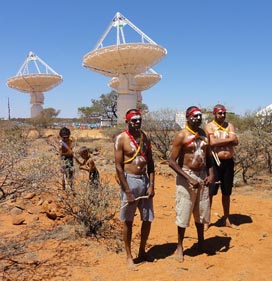 Wajarri Yamatji representatives attend the dedication of the ASKAP array at Murchison Radio Observatory on October 5, 2012.

"Our first antenna arrived in January 2010," says Turner, "and we're still very much an oddity in this region. Western Australia is all about sheep and mines. Radio astronomy is a whole different ball game."

Whether the 36 ASKAP antennas will eventually become integrated in the Australian part of the Square Kilometer Array is unclear. "It will be at least 10 years before SKA will start to produce any science," says Turner. "Meanwhile, the first proposals for doing science with ASKAP have already been submitted. Also, ASKAP has always been designed as a standalone observatory."

During my unannounced visit, Turner and his staff were making last-minute preparations for another official inauguration, that of the Murchison Wide-angle Array (MWA) on November 30th. "MWA is completely separate to ASKAP," says Turner. "It will also not be part of SKA, although it does exploit some technologies that are precursors to the low-frequency part of SKA." Still very much under construction, MWA will consist of many thousands of small dipole antennas, grouped in compact "tiles," that will pick up very low-frequency radio waves from the universe. It's a scaled-down version of the Low-Frequency Array (LOFAR) in the Netherlands. One key science goal of both MWA and LOFAR is the detection of the so-called epoch of reionization — an era in the very early universe when the first stars or quasars were ionizing intergalactic hydrogen gas.

Constructing an antenna field like MWA in the Australian outback presents its own specific problems, says Turner. The wires and cables connecting all the tiles tend to wear down rapidly due to ultraviolet radiation in the strong sunlight — and all the cabling needs to be termite-resistant.

As I left MRO for the slightly more civilized world further west, I tried to imagine how the scene will look in about 10 years, by which time the Australian portion of the Square Kilometer Array will dominate the open, desolate landscape here. Would this orange-dirt road, and all its potholes, corrugations and sandy patches still be here? I resolved to try to visit the area again — and, yes, I promise to make proper prior arrangements through the CSIRO headquarters in Sydney.