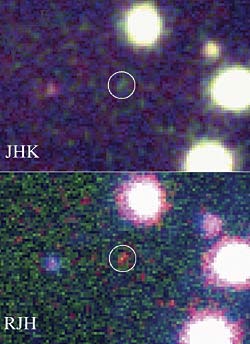 The farthest thing ever seen. These infrared images show a faint, extremely redshifted galaxy (named Abell 1835 IR 1916) behind the galaxy cluster Abell 1835 in Virgo. Its light has been stretched to 11 times its original wavelength by the expansion of space during the 13 billion years the light has been flying toward us. In the top image, the blue, green, and red colors of your monitor are assigned to the near-infrared colors J, H, and K, respectively. In the bottom image, blue, green, and red represent red, J, and H, respectively.

Just two weeks ago astronomers found their most distant object ever, at about redshift 7, using the Hubble and Keck Telescopes. Now a different group, using one of the Very Large Telescope (VLT) reflectors of the European Southern Observatory, claims to have smashed that record using a similar technique. Roser Pello (Midi Observatory, Pyrenees, France) and four colleagues say they have identified an extremely faint galaxy fragment that has a redshift of 10.0. This would mean we see it as it was just 460 million years after the universe was born — at just 3.5 percent of the present cosmic age — when the "dark age" that followed the Big Bang was ending and the first stars and galaxies were being born.

The observation was possible because a foreground galaxy cluster (Abell 1835 in Virgo) is acting as a powerful gravitational lens, almost like a giant telephoto attachment in front of the 8.2-meter VLT reflector. The European astronomers estimate that by a fluke of lucky placement, the faint galaxy's light is amplified 25 to 100 times (3.5 to 5 magnitudes) by the gravitational lens — as if the VLT had been enlarged to 40 to 80 meters aperture.

Objects at high redshifts are extremely faint for several reasons. It's not just that they're very far away. Their radiation is also greatly weakened by the redshifting; a photon displaying a redshift (z) of 10 has been stretched to 11 times its original wavelength, which weakens its energy by a factor of 11. Moreover, in any given second we'll receive 11 times fewer of these enfeebled photons than if no redshift had occurred. And on top of that, the first galaxies themselves were merely small fragments — "building blocks" that later merged to become the large galaxies that populate today's universe. The prize found by the European astronomers was as dim as 26th magnitude in the near-infrared J band and invisible at all shorter wavelengths. They find that it contains only a ten-thousandth the mass of our Milky Way, and can be seen at all only because it is undergoing vigorous star formation.

The first step in finding it was to identify faint candidate objects behind the gravitational lens that had the correct infrared colors for a very highly redshifted object. Once the astronomers located a good suspect, they managed to detect a very weak emission line in it at the near-infrared wavelength of 1.34 microns. They identify this line with the strong Lyman-alpha emission of hydrogen at 0.1216 micron in the far ultraviolet. Their paper appears in the March (IV) issue of the European journal Astronomy & Astrophysics and is described in an ESO press release.

More objects with redshifts as great as 7 to 12 may soon be found in the Hubble Space Telescope's Ultra Deep Field (UDF), which is scheduled to be released to the astronomy community and the public Tuesday, March 9th. 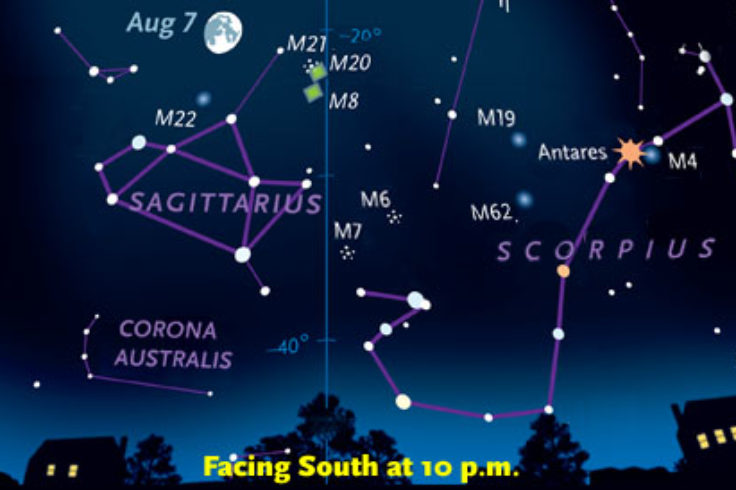