In 1936 Edwin Hubble came up with the idea of using a tuning fork to classify galaxies. He placed the elliptical (E) galaxies along the handle and normal and barred spirals (S and Sb) on the two prongs. At the junction were lens-shaped "lenticular" systems (S0), which he considered intermediate in structure. 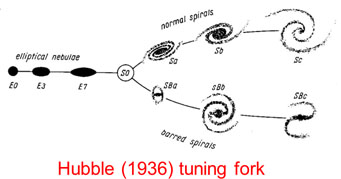 Edwin Hubble's tuning-fork diagram, which divides galaxies broadly into ellipticals (E), lenticulars (S0) and spirals (S and SB ), has been in use since 1936.

Hubble's classification scheme has remained popular among amateurs and professionals for more than 70 years. But the two dozen international researchers who've been working on the Atlas3D project think it might be time for change.

Atlas3D began in 2006 as an ambitious project to map 260 elliptical and lenticular galaxies (commonly called early-type galaxies) in three dimensions, using integral-field spectroscopy to obtain two-dimensional maps of the motions of their stars. Over the years, the team headed by Michele Cappellari (Oxford University), Davor Krajnović, Eric Emsellem (ESO) and Richard McDermid (Gemini Observatory) has published many papers that have projected these early-type galaxies in new light. 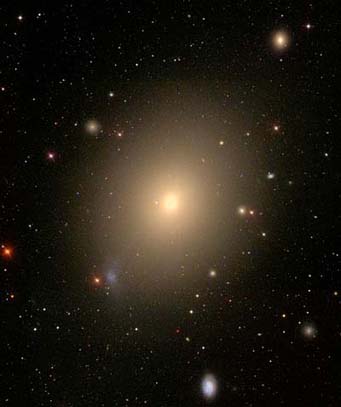 This image of the elliptical galaxy NGC 4472 is from the Sloan Digital Sky Survey. NGC 4472 was one of the early-type galaxies in the Atlas3D sample of 260, By combining the optical image with data from integrative-field spectroscopy, the team has classified this as a slow-rotator.

Early-type galaxies have an interesting history. When Hubble began his observations, he assumed that the featureless ellipticals were infant galaxies that would gradually amass dust and gas, grow into adolescent lenticular systems and then evolve into complex spirals. So the phrase "early-type galaxy" is actually a misnomer. Later research showed that the opposite is more likely true: ellipticals and lenticulars are actually old galaxies that likely evolved from aging spiral systems.

"The reason we are focusing on early-type galaxies is that they are thought to constitute the endpoint of galaxy evolution," said Cappellari. "They have already exhausted their gas from which stars were formed, and are now 'red and dead'. For these reasons they constitute an ideal place to look for the fossil record of billions of years of galaxy evolution."

In optical images, these early systems (built of old stars and little gas or dust)appear smooth and plain, while spiral galaxies show arms bursting with areas of active star formation, and disks rich in gas and dust. Also while most stars in a spiral rotate in the same direction within its central plane, yielding a high net rotation, stars in early-type galaxies are generally assumed to move randomly in a rounder shape, canceling each other's angular momentum and giving such systems very little net rotation.

The Atlas3D team used integral-field spectroscopy to obtain two-dimensional maps of the motions of the stars in early-type galaxies. Combining rotational data with optical images, the team concluded that these galaxies could be divided into fast and slow rotators.

But by combing images and rotational data, the Atlas3D team found that the majority of early-type galaxies, even ellipticals that were thought to be slowly rotating spheroids, rotate almost as fast as spirals do. Based on this finding, the team suggests that these early-type galaxies be reclassified as "slow rotators" and "fast rotators". Before the study, the 260 early-type galaxies in the sample divided into 68 ellipticals and 192 lenticulars. However, from its velocity mapping, the team believes that they could be better classified as 36 slow rotators and 224 fast rotators.

"These are not physical distinctions," said team member Anne-Marie Weijmans, (University of Toronto). "The fast-rotating early-type galaxies still look like ellipticals and lenticulars. They are not spirals because they do not have spiral arms and a disk."

"Appearances can be deceiving," said Tom Oosterloo (ASTRON, The Netherlands), another member of the team. "Even objects that appear elliptical, rather round and featureless on the sky, can be inclined and fast-rotating disks," Cappellari explains. "Our surprising new result is that the fraction of misclassification is as high as 66% for galaxies classified as elliptical by professional astronomers!" 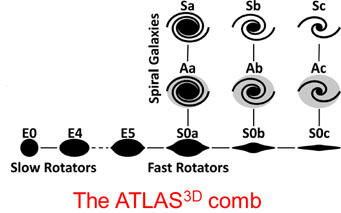 The Atlas3D team suggests this "comb" diagram as an alternative to Hubble's tuning fork diagram to classify galaxies. Early-type galaxies arranged on the handle, are classified according to their net rotation. The spirals are placed along three teeth. The fast-rotators at the junction of the teeth and comb likely evolved from that family of spirals.

The team has used these findings to suggest an alternative to Hubble's tuning fork: the Atlas3D comb diagram. It positions early-type galaxies along the handle in increasing order of their rotational speed, and spirals will occupy three teeth instead of two prongs. The fast-rotating galaxies, placed at the junction of a tooth and the handle, are likely to have evolved from that family of spirals.

Cappellari believes that this new approach should be kept in mind, for example, by the citizen-science project Galaxy Zoo, which teamed researchers with interested lay individuals to classify galaxies based on their shapes in optical images. And ultimately the Atlas3D team hope that its "comb" diagram will replace Hubble's beloved tuning fork.

Wait a week and I'll come up with a different and just as hypothetical view of galaxy evolution / type senario.

Hubble's tuning fork was the best explanation of the data available shortly after the discovery of other galaxies. Now that we have much more information about what's going on inside galaxies, our classification system needs to evolve to account for our current empirical understanding. With all due respect to L.E. Cain, this article is not about something that somebody just dreamed up because they were bored. It's an important advance in cosmological theory which will inform future research.

If this new diagram is meant to express evolution of galaxy types then I am lost before we begin. As I understand it the biggest elliptical galaxies were formed as the result of the merger of two or more spirals. If so then there should be some sort of continuation at the top of the "teeth" that takes this fact into account.

Rotation as a contributor to galactic morphology has been considered for more than four decades. Please keep in mind that these are proposals- models, if you will. A "theory" is the highest attainment of science, such as kinetic molecular theory, atomic theory, and so on.

As such, each proposed model of galactic evolution must itself evolve to account for more and more observational realities or it wither in the light of further research (pun intended).

What astronomers need is the same thing that you need for your savings to amount to anything significant- the secret ingredient, if you will, is TIME. Galactic evolution requires vast periods of time- not the snapshots of astronomers' total efforts.

Hubble's own remark (paraphrased here) about searching in the depths of the data comes to mind.

Hubble's classification of galaxies was a result of the construction of the 100-inch telescope at Mount Wilson, the largest on Earth at that time, which allowed high-quality galaxy images to be taken. For almost a century our view of galaxies consisted of images, of ever increasing quality (see e.g. the beauty of the color images generated by the Sloan Digital Sky Survey).

The above Atlas3D discovery and the proposed new comb classification is the result of another historical development in observational techniques: integral-field spectroscopy, which produces entire maps of the stellar motions.

Major discoveries in astronomy are often associated to major changes in observational techniques, so I would not be surprised if this new proposed description of galaxies was here to stay.