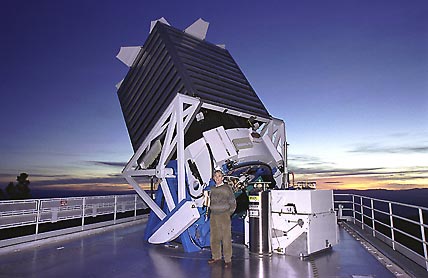 The Sloan Digital Sky Survey (SDSS) is being carried out with a 2.5-meter (100-inch) telescope in New Mexico, seen here at sunset with project director John Peoples. When finished, the SDSS will be a fundamental resource used by astronomers worldwide for many years to come. The newly discovered ring around the Milky Way is just one early result.

At Apache Point Observatory in New Mexico, a special-purpose, 2.5-meter telescope has been mapping a quarter of the sky with unprecedented detail. When complete, the Sloan Digital Sky Survey will provide accurate positions and brightnesses in five colors for more than 100 million stars and, in addition, distances (redshifts) of more than 1 million galaxies and 100,000 quasars. And though the data so far are only about 25 percent complete, early batches of science results have been coming fast and furious.

For example, upon sifting through millions of stars in Monoceros, astronomers found an odd population of very faint stars with unexpected colors. The reason the stars seemed odd turned out to be that they are remarkably distant. Brian Yanny (Fermi National Accelerator Laboratory) and Heidi Jo Newberg (Rensselaer Polytechnic Institute) conclude that the stars are part of a 120,000 light-year-wide ring that encircles the entire Milky Way. What’s more, the stars that make up the ring are most likely remnants from a small galaxy that collided and merged with the Milky Way in the very distant past.

The observations, reported yesterday at the American Astronomical Society meeting in Seattle, suggest that the ring contains as many as half a billion stars, about the number in the Small Magellanic Cloud. The ring went undiscovered for so long because of its dimness and its location. "The orientation of the ring is in the same plane as the Milky Way," says Newberg. "It was not detected until recently because it was obscured" by the galactic disk itself.

Because we are embedded in the Milky Way, notes Yanny, "We don’t know precisely what our galaxy would look like if we looked at it from afar." The new results are helping us gain a truer perspective on our galaxy as well as providing clues to its formation history.

The SDSS team observed less than 1/6 of the ring (a 47° arc), but its apparently circular shape led them to infer that it probably extends completely around the galaxy. The age of the stars within the ring (estimated from their brightnesses and colors) suggest that the collision that formed it took place at least 10 billion years ago. Spectroscopic observations of the composition of some of the stars indicate that they are not from the Milky Way, firming up the notion that the stars are collisional remnants.

To maintain the stars' fast motions along the ring's wide, circular orbit, immense amounts of dark mass must be present around the Milky Way — something astronomers have long known from other indicators. Future studies will use the ring as a tracer for the distribution of dark matter throughout our galactic halo.

In a separate study, a European team led by Annette Ferguson (University of Groningen) detected signs of the ring in a different part of the sky using the 2.5-meter Isaac Newton Telescope on La Palma in the Canary Islands. This study, aimed about 100° away from the SDSS swath of sky, found the stars to be slightly closer than in the SDSS region, suggesting that the ring may be slightly elliptical rather than circular. "It’s difficult to know for sure [if the ring is a true circle] seeing the little piece we have," says Newberg.