Rings of Uranus on Edge 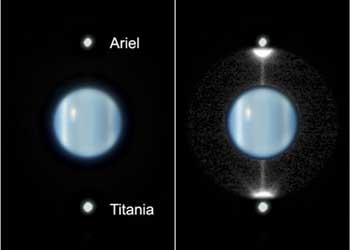 During the past year, astronomers at major observatories have aimed their telescopes at Uranus to study its system of rings from a previously unseen perspective. For the first time since the planet's rings were discovered in 1977, astronomers are seeing them edge-on.

Earth made ring-plane crossings in May and August, and will make a third and final one (for another 42 years) on February 20th. Although this last crossing will be too close to the Sun to observe, astronomers will take an extra look on December 7th when the rings will line up with the Sun.